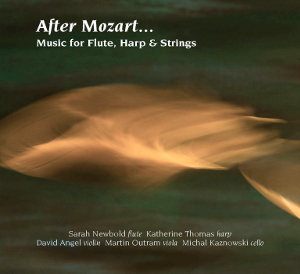 After Mozart…
Music for Flute, Harp and Strings

This CD can be ordered from Abergavenny Music by contacting james@abergavennymusic.com.

This is a splendid compilation of works for flute and various instruments featuring the impressive artistry of flautist Sarah Newbold who plays with a delicacy of tone that is absolutely beguiling. The program has been carefully planned out to include classics and rarities as well as an arrangement of music from Mozart’s Magic Flute that has been very cleverly arranged by Derek Smith for flute, harp and viola. Baxians will be interested in knowing how this new recording of the Elegiac Trio compares with what must now be nearly two dozen alternative versions and the answer is that this version more than holds its own and indeed offers new insights into this most magical of Bax’s chamber works.

Magical might seem the wrong descriptor for a work that was intended as a memorial to Padraig Pearse and the other Irish rebels who were killed during the Easter Uprising of 1916 but Bax’s use of flute, viola and harp can’t help but remind one of Debussy’s same combination of instruments for his Sonata of 1916, also recorded here. The Elegiac Trio is also one of Bax’s most impressionistic scores and usually sounds more haunting than sad. However, Ms. Newbold’s playing introduces a mood of deep melancholy that I’ve not heard in any other performance of this work and for the first time for me, at any rate, I feel like the real intent of this work is revealed. How she accomplishes this is difficult to say. The performance is a bit slower than usual but it has more to do with the sound she produces that is both warmer and more delicate than usual. She uses a fair amount of rubato in her phrasing but her performance isn’t wayward or mannered. Her partners are both first-class musicians who know their Bax intimately – especially Martin Outram, who was a violist in the Maggini Quartet and has recorded most of the works Bax wrote for viola and piano. I would encourage anyone who loves the Elegiac Trio to hear this performance as it truly has something special to say about the work. The recorded sound is also very pleasant.

The qualities that impressed me so much in the Bax are just as evident in the Debussy, Faure and Harty pieces. There is strict competition in the Debussy, of course, but this new recording is among the most atmospheric and again, emotionally moving I’ve ever heard of the Debussy Sonata, which is undeniably one of the greatest masterpieces of chamber music. I’d never encountered the Harty miniature before but I’m glad to know it now as it’s as charming as it is tuneful. The Mozart performances have just the right amount of sparkle and élan and they balance the later works perfectly.

This is a most recommendable CD both for the program and for the quality of the playing. Anyone with an interest in glorious flute playing should investigate immediately.