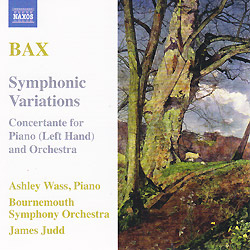 Of Bax’s five works for piano and orchestra, the Symphonic Variations remains the most enigmatic. Is it a concerto? A genuine set of variations? A musical roman-a-clef? A private love song to its “onlie begetter” Harriet Cohen? A masterpiece or inflated self-indulgence? Two things are indisputable: at nearly 46 minutes it is his longest orchestral piece, and the piano writing requires a virtuoso both powerful and subtle to bring it off.

With a bow to Margaret Fingerhut’s self-effacing sensitivity (Chandos, with Bryden Thomson) and Joyce Hatto’s wild-haired bravura (Concert Hall, with Vernon Handley), it must be said that in Ashley Wass the work has found its most complete interpreter on record to date. He does the power, he does the poetry. His solo Bax CDs are marred to my taste by skeins of turgid introspection, which would have been fatal here. So the best of it is, that with James Judd’s watchful support Wass keeps things taut enough for the structures to hold, without any compromise of that sensual, brooding beauty special to the Symphonic Variations.

Between them Judd, Wass and the BSO lay to rest most questions of form and content. “The Temple” is gloriously evoked, with its solemn grandeur and cymbal clashes (surely not, as Lewis Foreman hazards in his speculative notes, “oriental” but recalling the Swinburnian Attic rituals of Spring Fire.) The following “Play: Scherzo” is not so skittish as with Hatto/HandleyHHHao and offers less of an allegro vivace contrast than it might. After this, though, “Intermezzo: Enchantment” is most magically done. Was ever an intermezzo less relaxing than this alternation of muffled drums and fevered piano musings? Superbly imaginative writing, and like the earlier “Nocturne” ideally suited to Wass’s penchant for baleful introspection, it emerges here as the heart of the work. The tension is palpable, the orchestral outburst at the climax shattering.

The medium-bodied Naxos sound does not have the (perhaps excessive) range of the 1980’s Chandos recording, but nor does it suffer from the (certainly excessive!) reverberation of All Saints’ Tooting – the Poole hall’s resonance is just about perfect to allow clarity in the big orchestral tuttis without sacrificing intimacy in the solo passages. The piano itself is nicely placed within the orchestral web; the orchestral forces, notably the strings, play with real romantic fire in their bellies; and altogether this is the most persuasive reading of the Symphonic Variations set down to date.

I’m equally sweet on the filler, the late and light Left Hand Concertante, written as a penance for Harriet in 1949, after the infamous incident of the “dropped tray of glasses” reduced her slit right wrist to limpness. In such a generous reading as this the work does not outstay its welcome for a moment. I found marginally more romantic warmth here than in the chastely careful Fingerhut/Handley version on Chandos. Again, the Bournemouth strings play like angels in the lush big tune of the slow movement, where James Judd moves matters on without losing any sense of sunny spontaneity. The piece is no immortal masterwork: the outer movements do not ramble, but they do lack thematic definition. Still, this reading enhances the pleasure of the main meat, in what has to be Naxos’s most winning orchestral Bax disc to date. Roll on Winter Legends with the same team!