Clifford Gillam, the founder of the original Arnold Bax Society, has recently donated to the British Library two very interesting letters that were addressed to him—one from Bax, the other from Sibelius. The first of these was in response to Dr Gillam’s query about the Prelude to Adonais, which was written for two special matinées in aid of the Keat-Shelley House in Rome that were held at the Haymarket Theatre on 25 and 28 June 1912:

Dear Mr. Gillam
The Prelude to Adonais was an orchestral piece. Norman O’Neill, who conducted, asked me to write it for the occasion. I could not attend as I was in Ireland and do not know much about the performance. I believe that Marie Löhr recited Shelley’s ‘Sky-lark’. The score of my piece has completely disappeared, but that is no loss as it was very much a pièce d’occasion[.]
Sincerely yours
Arnold Bax
[P. S.] Norman O’Neill was the regular conductor of the Haymarket and wrote the music for Maeterlinck’s “Blue Bird” and “Mary Rose” by Barrie[.]

This letter was written in Storrington on 31 August 1953, just over one month before Bax died in Cork. Neither the score nor the parts of this short work have been seen since 1912. The matinées also included works specially written for the occasion by Parry and Coleridge-Taylor (who died a few months later), and Bax’s piece was the first item on the programme, preceding a reading by Genevieve Ward of seven stanzas from Shelley’s ‘Adonais’. In the absence of the score or parts the only conclusions one can draw about the prelude are that it must have been of a sombre nature, befitting Shelley’s poem, and scored for a small orchestra: ‘The Haymarket Theatre orchestra is a most admirable institution. . . . [It] consists of wood-wind, trumpets, and strings, and is what may be called a Bach orchestra.’ (Walter Weavener-Yeomans, ‘Theatre Music and Musicians’, Musical Times, April 1913, p. 240.) Bax may have been asked to write the piece on the strength of his setting of part of Shelley’s ‘Prometheus Unbound’ (Enchanted Summer).
In a letter to Delius dated 7 July 1912, Philip Heseltine (‘Peter Warlock’) wrote of having heard

some English music at a ‘Keats–Shelley matinée’, which included some utter filth by Hubert Parry and Coleridge Taylor, and a prelude to ‘Adonaïs’ by Arnold Bax, which I believe was very good, but, according to the delightful English custom that prevails at London theatres, everyone talks at the top of their voice during any piece of music that is played while the curtain is down, so the piece was for the most part inaudible! I was very sorry, since I am particularly anxious to hear a work of Bax: his songs are among the most beautiful I know. 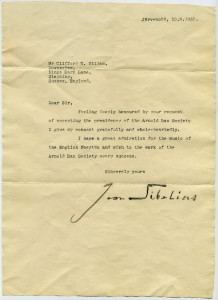 The other letter that Dr Gillam has donated to the British Library is from Sibelius, who, in 1955, two years before his death, was asked to become the first president of the Bax Society. It is known that the two composers got on very well together. They had first met in 1909, when Bax had been the accompanist at a Music Club reception given in Sibelius’s honour. Then, ‘in the “twenties”’, as Eugene Goossens relates, ‘a few of us—Bax, Bliss, Ireland, and myself’ met him on a visit to London at a luncheon given in his honour at Pagani’s Restaurant (Overture and Beginners, London, 1951, p. 75.) Finally, in 1932, the year in which Bax dedicated his Fifth Symphony to Sibelius, he and Harriet Cohen travelled to Helsinki, where, as she relates in her autobiography A Bundle of Time, they had ‘the gayest meeting with Sibelius at an outside restaurant sitting in the sun where I took their photographs, together and separately’. (These photographs are unfortunately not among the Harriet Cohen papers in the British Library.)

There are several quotations that suggest that Sibelius had a high regard for Bax’s music:

‘Bax is one of the great men of our time; he has a fine musical mind, and original personal style, a splendid independence, and, thank God, he can write a melody, and is not ashamed to do so.’ (Quoted in Harold Johnson, Sibelius, London, 1960, p. 159.)

When Bax was presented with his honorary doctorate by Durham University in 1935, Sir Edward Bairstow ‘quoted Sibelius’s opinion that he was the greatest asset to British music’. (Yorkshire Post, 28 June 1935, p. 5.)

Confirmation of Sibelius’s high regard for Bax can also now be seen in the typed letter that he sent to Clifford Gillam. It is dated ‘Järvenpää, 10.8.1955’ and signed in pencil: