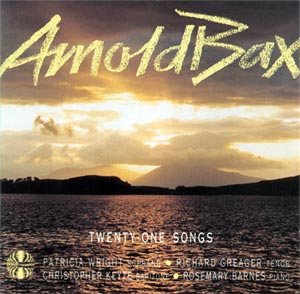 Eternity, A Christmas Carol, Far in a Western Brookland*, The Market Girl*, Langueo d’Amours, Sarabande, Femmes Battez vos Marys, La Targo^, The White Peace, The Song in the Twilight, Out and Away*, I Heard a Piper Piping, Shieling Song, To Eire, Rann of Exile*, A Milking Sian, The Flute, Magnificat, I Have a House and Land in Kent^, Jack and Jone^, O dear! What can the matter be? 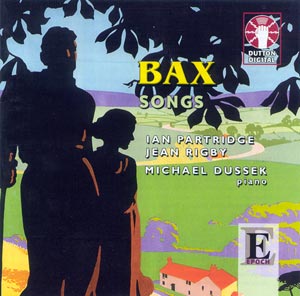 Youth, Parting, The Fairies, Lullaby*, A Milking Sian*, Song in the Twilight, The Enchanted Fiddle, Far in a Western Brookland, To Eire, A Celtic Song Cycle*, The White Peace, When we are lost, When I was one and twenty, Roundel, The Market Girl

The 20th century song repertoire is one of the richest quarries in English music. As Bax wrote well over 100 it may seem odd that so few have made it even onto the fringe of the repertoire. Only The White Peace, famously recorded by John McCormack, and later by Kirsten Flagstad amongst others, is really well known. Understandably so, for Bax’s setting of Fiona Macleod’s Celtic vision of bliss and forgetting has a fine melody, a breathtaking harmonic surprise, and above all brevity to commend it.

Both these CDs devoted to Bax songs feature The White Peace. Tenor Ian Partridge (Dutton) gives a contained reading, clearly enunciated, coolly “English” in temper. Patricia Wright’s (Continuum) is just as contained but warmer, more dramatic, more concerned with musical line than verbal nuance. These two take the lion’s share of the songs on their respective discs, and the contrast between them tells. Partridge remains one of the greatest of recitalists, and if nowadays vocal control is tight rather than firm, the top strained and dynamics limited, his verbal clarity in such songs as Parting (an atmospheric 1916 setting of ‘AE’ George Russell quoted in the Symphonic Variations) remains second to none. Wright’s rich soprano gives much more purely musical pleasure, and it is an advantage to hear a voice of this amplitude in songs which are prevalently Celtic rather than English in feeling.

Her passion makes the heartfelt To Eire (1910) sound a better song than it does under Partridge, and in I Heard a Piper Piping (one of the composer’s finest later songs, from 1921) her faultless legato and range of tonal colour evoke a moving image of music in a desolated landscape. This song is not included in the Dutton collection, which tends to focus on Bax’s earlier output – not necessarily a disadvantage, since its musical quality and style remained pretty constant from 1904, date of the early A Celtic Song Cycle (Dutton) through to 1925, when Eternity (Continuum) was set down in the version heard here. Indeed, that very consistency is the Achilles heel of Bax’s songs. In small doses they are highly attractive, but over an hour or more his preoccupation with sensual dreams and nobly tragic visions palls. Bax’s music forOliver Twist shows that he did have a gift for creating atmosphere in a couple of orchestral brush strokes, but his piano and voice songs can seem much of a muchness.

Both these albums share the burden between two or more singers. Wright is joined by the raw-boned, ample tenor of Richard Greager, very effective in the most declamatory of his four allotted songs, the powerful Rann of Exile (1922); and by the soft-grained baritone of Christopher Keyte, whose three include the vigorous arrangement of the Provençal folksong Le Targo, one of a group Bax wrote for the French soprano Ramonde Collignon at the end of the First World War, several of which are included to good effect on this Continuum disc.

Partridge is joined by the mezzo-soprano Jean Rigby, whose contribution is focussed on the early A Celtic Song Cycle. This is the main highlight of the beautifully recorded Dutton CD. Rigby brings an intensity and variety to the cycle missing with Partridge – the unworldly, vibrato-free darkness she introduces for the last song, the funereal At the Last, is chillingly theatrical. As in many of the other, earlier songs the piano part inA Celtic Song Cycle is on a grand scale, and Michael Dussek’s accompaniments are impressively virtuosic. So too are Rosemary Barnes’s, but her instrument is recessed in Continuum’s more reverberant sound picture, and the balance on this earlier release is not always perfect.

The odd Bax song or two is to be found elsewhere (notably John McCormack’s legendary The White Peace on Pearl CD) but between them these two recitals contain most of the best. The good news is, that there are only six duplications. Dutton’s main repertoire advantage is in presenting the haunting Parting and the complete A Celtic Song Cycle; but anyone wanting only one, representative disc should on balance choose the Continuum, not least for Patricia Wright’s memorable contribution, but also because in I Heard a Piper Piping and Rann of Exile it gives us two of the very finest of the composer’s songs, both worthy to stand beside The White Peace.