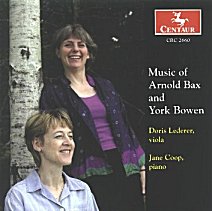 Bax’s Viola Sonata has one of the most colorful recording histories of all his works.  For one thing, it’s the only piece by Bax that the composer himself recorded – with violist Lionel Tertis.  It is also one of the few works by Bax in which we can hear how his muse, Harriet Cohen – in performance with William Primrose – interpreted and coped with the challenges of Bax’s fiendishly difficult piano writing.  The Viola Sonata has been recorded more times then any of Bax’s other string sonatas although surprisingly there have been few modern recordings of the work and those that are available are on obscure or difficult-to-get-hold-of labels.   This new recording on Centaur is no exception.  It took a little searching to locate a copy but am I ever glad I found it!  It contains what is one of the best performances the work has received on disc and therefore fills a very important gap in Bax’s discography.  In addition it provides recordings of two impressive works by Bax’s exact contemporary, York Bowen.


What distinguishes this recording for me is the full-bodied piano playing of Jane Coop. Aside from being technically assured, she plays with tremendous vitality and produces a rich sound that blends beautifully with the warm, vibrato-lean tone of Doris Lederer’s viola.  Ms. Coop also understands that in this sonata, the piano is an equal partner as there are many passages where the piano dominates the interplay between the instruments.  A problem with so many recordings of this sonata is that the pianist is either not up to the technical challenges of the work or plays (or is recorded) in a very recessed manner.  The great failing of the composer’s own recording is that the piano is so recessed that it sounds as if Bax is in a different room playing something unrelated to what Tertis is doing.  It’s a shame that the balance is so skewed because both Bax and Tertis play with a ferocity and virtuosity that is breathtaking.


Having such a strong partner in Jane Coop, Ms. Lederer is inspired to play very forcefully and the result is the most intense, no-nonsense performance this Sonata has received in many years.   The Tertis recording with Bax is exciting but their breakneck speed minimizes the tender poignancy of the first movement and brooding melancholy of the last.   Lederer and Coop are just as virtuosic but their performance has more depth and more fully explores the shifting moods of this astonishing work.  The hobgoblin second movement is also brilliantly characterized and it is here where Ms. Coop’s playing stands out so effectively.


Hearing this recording renewed my enthusiasm for the Viola Sonata, a work that has a reputation for being one of Bax’s greatest chamber works but one that has few champions today.   The only other readily available recording is on German Koch with Ivo-Jan van der Werff (viola) and Simon Marlow (piano).  While both artists play beautifully and are, if anything, even better recorded then Lederer, their performance rarely catches fire.   Mr. van der Werff’s playing in particular sounds too reserved and this is the only recording I know of where the pianist dominates.    I was very surprised hearing Harriet Cohen’s recording with William Primrose again.  Primrose plays effortlessly but also a little too mechanically.   Cohen’s playing does not sound secure (perhaps she was having an off day?) and I was bothered by her many sudden shifts in tempo that break the musical line.  I’ve heard better examples of her playing.   The recording by Herbert Downes (viola) and Leonard Cassini (piano) has a good reputation and certainly the playing by Downes is very fine but here again, the pianist is the wink link – his playing sounding rather insecure at times.  That said, there’s a lot more character and feeling in their performance than can be found in the Cohen/Primrose run through.


My favorite recording of the sonata has been the Musical Heritage Society recording from the mid 1970s with Emanuel Vardi (viola) and Abba Bogin (piano).   This performance is similar to the new Centaur disc and I wonder if the younger players weren’t inspired by it.   The playing by both Vardi and Bogin is brilliant, upfront, very exciting but also extremely sympathetic to the darker moods of the music.  If anything, this performance has even more character then the new one but it isn’t nearly so well recorded and is sadly unavailable.   The new Centaur disc is a worthy successor, at any rate.


The Bowen Sonata in C minor and Phantasy for Viola and Piano are very attractive works and I believe Baxians will respond to the music even if the Bowen sonata sounds nothing like Bax.  Both works can be heard on a Dutton Disc that contains the Second Viola Sonata but I have not heard that disc.  The Bowen sonata is a huge Brahmsian edifice that at times reminded me of Dvorak, Ravel and Elgar.  OK, I’m not so sure Bowen had the most distinctive voice but this sonata certainly shows he was a master craftsman who was capable of writing very engaging and powerfully argued music.  The first movement of the sonata in particular is a powerfully structured work and the players go at it full force.   The Phantasy sounds more obviously English although for me it was also the less interesting of the two works.  Nevertheless, it is very engaging and both pieces should attract many more people to Bowen’s cause.  I’m certainly eager to hear more of this composer.


In summary, an outstanding disc with the finest modern performance of a great Bax masterpiece and a fine introduction to the music of one of Bax’s contemporaries who deserves to be better know.  I hope Centaur intends to record Bax’s Piano Quintet.  If so, they should invite Lederer and Coop to participate, as they are outstanding musicians who clearly understand how to put Bax across.  Incidentally, I found my copy of this disc on Amazon.com USA but I also see that Centaur has a website at: http://www.centaurrecords.com/.  The disc can be ordered directly from this site.