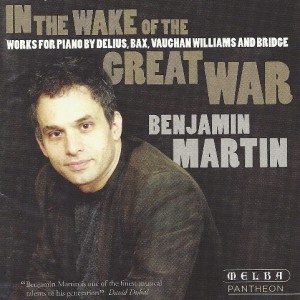 “In the Wake of the Great War”

Benjamin’s Martin’s father was the British violinist Christopher John Martin, a founding member of the illustrious Edinburgh String Quartet and later a beloved conductor in his adopted Australia, where Martin grew up. He studied piano at Julliard where his teachers included the brilliant John Browning. Martin has an enormous repertoire that is centered on Bach and the standard repertoire but at the same time he has expressed a special feeling for composers whom he feels are neglected, including 20th century British composer like Bax, VW and Bridge. The Bax recording comes from a live 2006 recital while the other recordings were made later in the studio and are just now being made available in a fascinating compendium that references the First World War and its impact on four of the most important British composers of that time.

It’s interesting to me how Bax’s Third Piano Sonata has suddenly emerged as the most frequently played and recorded of his sonatas while for many years it was considered something of a black sheep due to its technical and structural difficulties. It was composed during that tumultuous period in the mid-1920s when Bax was experiencing a personal crisis over the decline of his relationship with Harriet Cohen. Other works from this period include the equally elusive Second String Quartet and his darkest and most uncompromising symphony, the Second. Bax seems to have been doing battle with some rather sinister inner demons as there is a mood of malevolence that hovers over these three great masterpieces. The Third Piano Sonata is less romantic than the First and less programmatic than the Second. The Third is to my ears the most original of Bax’s piano works and in places it sounds almost improvisational with moods that are restless and unsettling. The second movement provides a respite and is an absolute gem as it contains some of Bax’s most beautiful ‘Celtic’ melodies. The third movement is again restless and rather sinister in nature – as if some ominous force is threatening to consume whatever happiness and contentment that may have come before. It’s an astonishing work and I understand why more contemporary pianists who have recorded complete cycles of the Bax sonatas count it as their favorite including Ashley Wass, Malcolm Binns and Michael Endres. I’m assuming that is also true of Benjamin Martin who certainly plays this work with all the virtuosic power it requires.

Because it’s such a complex work, it is also very difficult to ‘pull off’ as can be judged from the several recordings it has received. Some pianists like Malcolm Binns and Eric Parkin play it relatively straight but their interpretations sound underpowered and they seem unable to do justice to conflicting forces alight in this music. Iris Loveridge in her pioneering mono recording on Lyrita plays with much greater force but the mono recording sounded ancient even for the time when it was recorded, which was in the early 1960s. If sound isn’t an issue, than Iris Loveridge is easily a top contender in this work but I feel she’s been overtaken by Michael Endres on Oehms who plays with the same intelligence and faithfulness to the score but with even greater technical assurance and he’s given state-of-the-art piano sound. Endres is for me the recommended version because he illuminates the many complexities of this score while playing with maximum expression but I wouldn’t want to be without those more personal versions of the Third Sonata by Wass and Benjamin Martin, as they in-fuse so much of their own personality into the playing.

Ashley Wass’s approach to the Third is very broad but it works because his concentration is so strong and the sound he produces so wonderfully warm and enveloping. Unfortunately, his recording of the Third Sonata is marred by an obvious misread (E for E flat) in the seventh bar (and later on when that phrase is repeated) in the second movement. I’m surprised his producer didn’t catch it and I assume they must have been working from a marked up copy of the score. That misread is a shame as the performance as a whole is very fine and it is certainly brilliantly played and recorded.

Luckily, there are no obvious wrong notes in Benjamin Martin’s performance, which was recorded live before a quiet audience. The piano sound is excellent too. Martin’s performance is virtually the antithesis of Wass in that it is extremely volatile with sudden shifts in tempo and a liberal use of rubato that are used to accentuate phrases or bring out inner lines. It’s a performance that required a few listenings in order for me to appreciate its strengths but from the beginning I found it compelling and I have liked it more with each repeated hearing. True, I would have preferred a more free-flowing tempo in the second movement but the outer movements are brilliant and the entire performance makes a very dramatic impression.

In honesty, what makes this disc so extraordinary for me are the performances of the other works on the program including the most impressive performance of the Bridge Sonata that I’ve heard in quite some time. The same virtuosic temperament that make the Bax so fascinating is put to even better use in a performance of the Bridge that is shattering in its anger and grief. Martin has the full measure of this work which has received several superlative interpretations in recent years including those by Kathryn Stott, Mark Bebbington and Ashley Wass – but Martin for me is the most emotionally involving. The performances of the Delius Pieces and VW Hymn are intensely thoughtful as is Martin’s own arrangement of Charles Chaplin’s Smile.

So in short, I can recommend this disc for a controversial but compelling Bax Third and a shattering Bridge Sonata. Benjamin is an obviously a brilliant pianist with much of interest to say about whatever music he plays. I hope he continues to keep Bax and Bridge in his repertoire as they could certainly benefit from his continued advocacy.