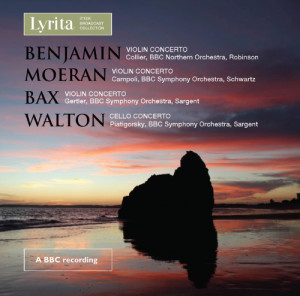 Bax had good reason to be pessimistic toward the end of his life. He had only to compare the number of performances any of his symphonies had received with those of his contemporaries Vaughan Williams or William Walton to feel doubtful. Only the Third Symphony of Bax was played with any regularity and that was due primarily to Sir Henry Wood’s advocacy of it. Following Wood’s death in 1944, performances of the Third Symphony became as rare as those of any other Bax symphony. In comparison, Vaughan Williams’ Sixth Symphony was performed more than 100 times the first year after its premiere in April 1948. The reason for Bax’s neglect, then as now, confounds his supporters but the truth seems to be that his music never really caught on with the public despite valiant efforts made by his few champions such as Wood, Barbirolli, Sir Basil Cameron and Sir Eugene Goossens. Bax himself said he was frustrated by the BBC’s “studied neglect” of his music and this comment indicates just how critical a role he assumed radio played to familiarize audiences with music it had no other way of hearing other than live performances as gramophone recordings of most contemporary music were still extremely rare. By the time Bax died in 1953, only a handful of his works had been recorded commercially and it would be another 22 years before all seven of his symphonies were available on disc.

The irony is that it would be the BBC who would keep Bax’s reputation alive in the years following Bax’s death and is in large part responsible for the Bax revivals that occurred during his centenary year as well as the 50th anniversary of his death. But the first major revival took place in the mid-1950s shortly after Bax’s death when the BBC broadcast all seven of Bax’s symphonies in performances featuring the BBC Symphony Orchestra led by Eugene Goossens, Rudolph Schwarz, Stanford Robinson and a young Norman Del Mar. It was these early broadcasts that early collectors of Bax’s music treasured until commercial recordings started appearing in the mid and late 1960s.

It has always been assumed that the appointment of William Glock as Controller of the BBC in the early 1960s brought an end to broadcasts of Bax’s music on BBC Radio 3 but in truth, his rein represents something of a golden age as broadcasts of Bax symphonies were more common in the late 1960s and 70s than at any time before or since. For instance, from that period we have performances of both the First and Third symphonies led by Norman Del Mar as well as a Barbirolli studio recording of the Fourth Symphony from 1964. Barbirolli’s assistant at the Halle, Maurice Handford, was a great Baxian and recordings exist of his conducting the Fourth and Fifth performances with the Halle. A young British conductor by the name of Vernon Handley conducted performances of the Third, Fifth, Sixth and Seventh Symphonies during the Glock years and there exists an absolutely riveting account of the Fifth Symphony conducted by Harry Newstone and played by the Royal Philharmonic Orchestra dating from the early 1960s. These recordings have long been appreciated for their raw excitement and electricty by collectors willing to overlook the significant sonic imperfections. Unfortunately, these recordings have never been made available to the general public but now there’s a possibility that some of these classic recordings may be released in professional transfers from a label with an unrivalled where to buy phentermine hcl 37.5 mg reputation for recordings of British music – Lyrita.

Lyrita’s founder, Mr. Richard Itter, was an avid collector of off-air recordings and over the years he accrued an enormous library of radio broadcasts that he recorded on for the time state-of-the-art equipment. His estate has now worked out an agreement with the BBC to release many of these off-air recordings and among the very first to be issued is a set of British violin and cello concertos by Arthur Benjamin, E.J.Moeran, William Walton and Bax in recordings all dating from the 1950s. The sound is obviously mono but the quality is astonishing considering the age and this series gives me hope that some of the Bax recordings mentioned above may be included in future releases in this series.

The first commercial recording of Bax’s Violin Concerto was made by Chandos in the early 1990s by violinist Lydia Mordkovitch and conductor Bryden Thomson. It is at best a serviceable recording that misses much of the impish magic and light-hearted charm of this concerto. For those qualities you have to go back to a 1943 BBC broadcast recording by violinist Ida Kersey and the BBC SO conducted by Sir Adrian Boult now on Dutton and coupled with Barbirolli’s classic recording of the Third Symphony. Bax wrote his concerto for Heifitz who famously rejected it because it wasn’t virtuoso enough. We are so lucky to have Eda Kersey’s brilliant interpretation as she’s the only violinist I’ve heard who plays this work with enough muscle as well as charm to convince one that this relatively light-weight concerto should be included among Bax’s most attractive works.

The recording on this disc was broadcast by the BBC in 1957 and features violinist Andre Gertler and conductor Sir Malcolm Sargent along with the BBC Symphony Orchestra. Gertler’s steely tone, razor-sharp intonation and tendency to press forward give this concerto a surprisingly modern edge. The Kersey/Boult performance is even more driven but at the same she allows for more rubato and expressiveness in the playing that for me indicates greater familiarity with the work. It remains definitive but the Gertler performance is very fine and he is sensitively accompanied by Sir Malcolm Sargent, a conductor whom Bax loathed as a person but who was obviously an experienced advocate of Bax’s music. This is a very important document and one that should be heard by anyone who loves this quixotic concerto.

The other performances on this disc are likewise worth hearing. The Benjamin Violin Concerto is beautifully played by Derek Collier and the Walton Cello Concerto is given its European premiere performance by the cellist who commissioned the work, Gregor Piatigorsky. This performance is again conducted by Sir Malcolm Sargent. Unquestionably the highlight of the disc is the impassioned performance of E.J.Moeran Violin Concerto by Alfredo Campoli and the BBC Symphony conducted by Rudolf Schwartz and broadcast in 1959. This Concerto has been extremely well served in recent years by Mordkovitch and Tasmin Little – both on Chandos, but even they don’t quite match Campoli’s expressiveness or ability to expose the pain and longing right below the surface of this most beautiful of concertos. He is matched every step of the way by Rudolph Schwartz, an Austrian born conductor who shows a remarkable affinity for this very Anglo-Irish score.

This is an important release and should be investigated by anyone with a love of British music. Let’s hope it is the first of many releases of treasured off-air recordings of Bax’s music to come. The possibilities are endless and I will be watching this new series with much anticipation.