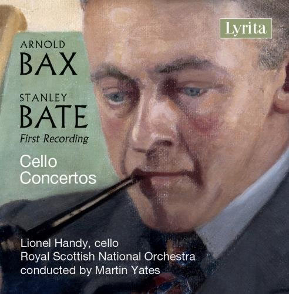 First a confession: I’ve always found Bax’s Cello Concerto to be a tough nut to crack. Bax found it difficult to write and to me it sounds as though some of the effort he was experiencing in writing the concerto found its way into the music itself. There’s a very terse quality to the thematic material, which is more fragmented than is usual with Bax. What themes there are aren’t especially memorable and the overall mood of the work is enigmatic and vague. I suspect the reason there have been so few recordings and public performances (even by Bax standards) of this work is because on the surface, it doesn’t appear to be a very rewarding piece to play. The question here is whether a great cellist like Lionel Handy can make something special of this work and I’m happy to say the answer is an emphatic yes.

Mr Handy is no stranger to Bax’s music. He recorded a superlative disc of Bax’s music for cello and piano a few years back and he studied with Florence Hooton, a great champion and friend of the composer. He possesses all the technique necessary to do full justice to what must be an extremely difficult concerto to play. The only other recording I’ve heard of this work is the mid-1980s Chandos recording with Raphael Wallfisch and the London Philharmonic conducted by Bryden Thomson. Wallfisch recorded the Bax around the same time he was engaged to record most of the great British cello concertos for Chandos and his recording of the Bax is as polished and sympathetic as you’d expect from such a master player. The recording suffers from the usual over-reverberant acoustic that Chandos favoured back in those days but otherwise I’ve always felt it to be a highly successful performance of a not so engaging concerto.

This new recording by Handy, featuring the Royal Scottish National Orchestra conducted with great authority by Martin Yates, is a much more expansive and searching performance than the Wallfisch. Handy takes his time to explore all the by-ways of his enigmatic work and for me he reveals much more of the works steely core and also its expressive heart. It’s obvious that Handy has thought long and hard on how to bring this work off and the concentration of his playing is remarkable. After a couple of listens to this new recording, I came away with a new respect for Bax’s Cello Concerto and an appreciation for its many beauties. This new Lyrita recording was made in the Henry Wood Hall where the RSNO makes many of its recordings. It’s a dry acoustic that does little to flatter the string sound of the RSNO or of Mr. Handy’s cello, for that matter – but I still prefer it to the echo chamber acoustic of the older Chandos recording. Baxians should investigate this new recording as it has so much new to say about this “problem child” among Bax’s oeuvre.

The long neglected Stanley Bate concerto is a discovery of Mr. Handy’s and he was quite intent on getting it recorded. Handy’s dedication and commitment to the work is obvious and he reveals a very charming and accomplished concerto that is certainly more immediately pleasing and less challenging than the Bax on first hearing but at the same time lacks the personality and distinctive traits that would indicate it to be the work of a really great composer. Nevertheless, it is fresh and characterful and Handy convinces us that it is a work that should not be forgotten, and thanks to his efforts, it won’t be.

It’s very heartening to see a new Bax recording being issued from Lyrita. I still carry the hope that Lyrita will someday complete its Bax symphony cycle by recording the two works still missing from its catalog: the Third and Fourth Bax Symphonies. Martin Yates would be ideal conductor and the RSNO has already proven it’s mettle in Bax — but please, can you find a better place to record?