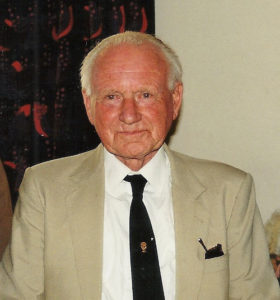 Dr Clifford Wilfred Gillam, the founder of the original Arnold Bax Society, died peacefully on 2 June, seven weeks short of his 90th birthday. I first came across his name when I read an article by him in the Bax Society Bulletin of October 1968, p. 40. It was called ‘A Lost Work by Bax’ and began: ‘In 1953, when I was doing some research on Keats, I came across a reference to two matinees held at the Haymarket Theatre London in June 1912 in aid of the Keats-Shelley House. The programme included a Prelude to Adonais by Arnold Bax.’ Gillam subsequently wrote to the composer, asking him for further information, and his reply can be seen elsewhere on this website (see ‘Bax and Sibelius letters donated to British Library’, 12 November 2015). His Keats research was presumably connected with a Ph.D. thesis that he was in the process of writing for London University. Two years later, he published a letter in The Gramophone of August 1955, prefaced by a comment by Compton Mackenzie: 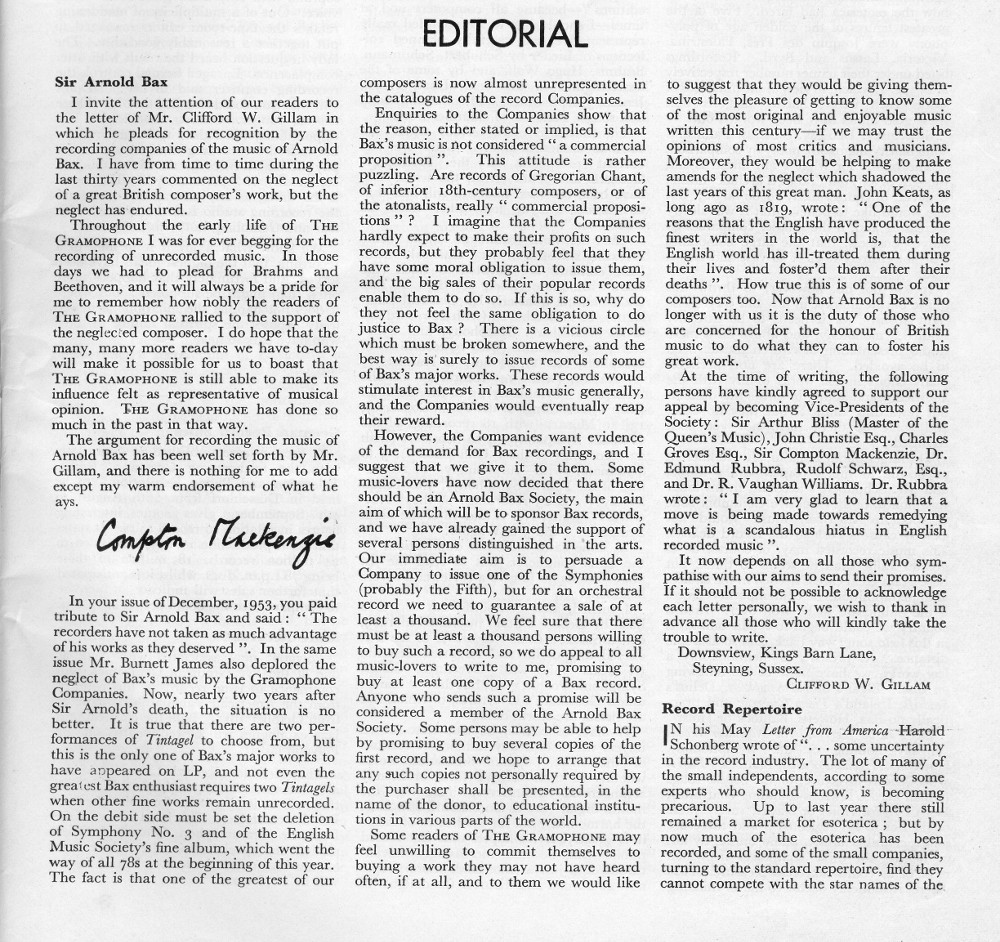 It is inevitable that Dr Gillam should had made the acquaintance of Harriet Cohen, who was on the committee of the Society. She gave him some sheets of manuscript paper containing sketches in Bax’s hand. Most are unidentifiable, but they include some jottings for The Happy Forest and an intriguing fragmentary short score entitled ‘Carnival’, which is clearly influenced by Stravinsky’s Petrushka. She also gave him the song ‘Dermot Donn McMorna’ and the only surviving fragment of Bax’s Second Viola Sonata (1933): a single folio containing the ending of the slow movement and the beginning of the finale. Bax later abandoned the work and turned what he had written into his Sixth Symphony. Cohen also told Dr Gillam that the composer, who had decided not to attend the coronation of 1953, watched it on television at her flat and was disappointed that his march (conducted by Sir Adrian Boult) was not included in the part that was broadcast. It came near the end of the recessional, and, though none of it was heard in the televised transmission, part of it can be dimly heard on a BBC recording of the wireless broadcast. It was apparently intended to have been played a little earlier, as an obituary of Peter Dimmock, the BBC producer of the television broadcast, makes clear: ‘Dimmock also prevailed on the Earl Marshal to ditch a specially-composed march to which the newly-crowned Queen and her entourage were to have processed out of the Abbey. Instead Dimmock suggested Elgar’s Pomp and Circumstance March No 1, better known as Land of Hope and Glory.’ (Daily Telegraph, www.telegraph. co.uk, 22 November 2015.)

I corresponded with Clifford for many years and on several occasions visited him in his house in Eastbourne. We also met at a Bax exhibition that was held in October 2003 in Storrington Museum. I never had the pleasure of meeting his wife, Enid, who had died in 1987. They had married in 1957, with Clifford thus becoming the stepfather of her children, John and Jean, by an earlier marriage. He was a fine pianist and what is known as ‘a gentleman of the old school’: modest, polite, and ever ready to help with any queries that I may have had, especially when I was engaged on writing my catalogue of Bax’s works. Dr Gillam’s other main interest, apart from music, was English literature, and he taught for many years in various schools. He also spoke Welsh and had a strong feeling for the environment, being a vegan and largely self-sufficient when it came to growing his own vegetables.

Admirers of Bax owe a good deal to Clifford Gillam’s enthusiasm for his music at a time, in the mid-1950s, when his reputation was starting to wane and we were about to enter a long period during which the musical establishment largely ignored his prolific output. We must not forget, however, that between September 1956 and April 1957 the BBC broadcast all seven of his symphonies, most of them twice on successive nights, and it is tempting to attribute this last surge of interest before the William Glock era to Clifford Gillam’s valiant efforts in founding the Arnold Bax Society, with Sibelius as its first president.