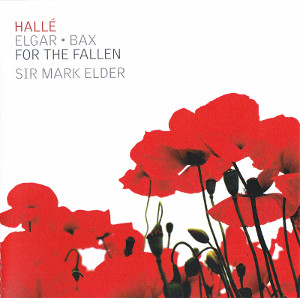 It may come as a shock to find that this is the first, new recording of a Bax tone poem to emerge since Chandos’s excellent collection under Andrew Davis over two years ago. It will be less of a shock to find that the new arrival likewise hails from Manchester, where Bax was lovingly espoused more than half a century ago by John Barbirolli’s Hallé, and later by the BBC Philharmonic under Vernon Handley, Edward Downes, Martyn Brabbins and (latest not least) Andrew Davis himself.

Recently the Hallé has entered the lists again on its own record label, under its chief conductor Mark Elder. Their recordings of Spring Fire and Tintagel are now joined by an In Memoriam recorded live in the Bridgewater Hall, on 6 November 2014. The newcomer offers a strikingly different perspective to Handley’s 1998 world premiere and Chandos recording. Where Handley is all passionate intensity, Elder adopts a broader tempo and presents Bax’s noble, main theme – one of his biggest and best tunes, sensibly recycled in the Oliver Twist film music he wrote over thirty years after In Memoriam was mothballed – with less urgency and more emotional reticence.

Given that Bax’s opening is marked “Slow and restrained in expression” Elder’s is a viable and imaginative approach, lending the work its own sombre gravitas. Flute, horn and harp gently garland the hero with musical wreaths as the hearse implacably advances, while keening clarinet and oboe lament over a steady side drum. Although there’s the occasional suspicion that the whole, grand business just might grind to a halt – Elder takes a good two minutes longer than Handley over the piece – the Hallé’s coda glows with a reflective, Delian sunset which casts new light on one of Bax’s clearest and pithiest works. How extraordinary to think that In Memoriam gathered dust at the composer’s publishers for over three-quarters of a century! This second recording cements its place in the canon.

As to how a musical tribute to an executed Irish leader of the Easter Rising fits into a CD programme entitled ‘For the Fallen’ and liberally illustrated with World War I poppies … well on the face of it, this seems either an embarrassing blooper or a supreme stroke of post-modern irony. To be fair, Elgar’s brief 1901 suite drawn from the music he wrote for George Moore’s and W. B. Yeats’s heroic, Irish legendary drama Diarmuid and Grania makes a sensible bridge to the Bax, which is the last piece on the disc. Grania and Diarmid (Elgar’s retitling) is affectingly done, with Madeleine Shaw an imposing soloist in the rarely heard ‘There are seven that pull the thread’, Yeat’s haunting poem sung in the play by an Irish equivalent to Wagner’s Norns.

If Bax provides the disc’s highlight, Elgar runs him close in the melodrama A Voice in the Wilderness, written in 1915 and staged the following year in support of the people of Belgium. This rarely-heard setting of a poem by Émile Cammaerts for speaker, soprano and orchestra emerges as a touching tribute to human resilience in the teeth of war. Joshua Ellacott’s Mancunian soldier-narrator declaims his text with a simple dignity which avoids actorish pomp and circumstance. Jennifer France sings the central soprano solo with a fresh radiance proper to the peasant girl she portrays, and Elder’s reticent accompaniment serves to enhance the work’s effectiveness. This is far and away the best CD version of the three I’ve encountered, and something of a revelation.

Last and least – though unfortunately first on the disc – is The Spirit of England, a dutiful wartime setting of a trio of Laurence Binyon poems, including the famously memorable stanza beginning “They shall not grow old, as we that are left grow old…”. Conductor, orchestra and the Hallé Choir do their best, but they are not helped by Elgar’s gloomy, morose and dispiritingly uninspired music, the heavy seasoning of Binyon bathos (“They fought, they were terrible…”), and an off-form soprano soloist who grates on the ear and reduces her words to an indistinct, grey mush.

Despite the titular attempt to draw the threads together (not to mention those incongruous poppies) this is a curate’s egg of a programme; and it is not helped by a regrettable confusion in the late Michael Kennedy’s note on the Bax, when he writes that In Memoriam is an orchestration of the 1917 sextet In Memoriam (aka Irish Elegy) for string quartet, cor anglais and harp. Although they share a title, as Graham Parlett’s accompanying article fully explains, the chamber work post-dates the orchestral tone poem by a year and the two have no musical commonality. Blame lies not with the writer – even Homer nods, and Kennedy was a sick man by the autumn of 2014 – but with the editors of the Bridgewater Hall programme and the CD’s liner notes, neither of whom have picked up on a crucial factual error.

Never mind the faux pas. This In Memoriam – played in Dr. Parlett’s improved and corrected 2013 published edition – deserves an honourable place as an alternative to Handley’s premiere recording, while the shorter Elgar works enhance the disc’s appeal. Despite the black hole which is The Spirit of England, Elder’s and the Hallé’s CD will be self-recommending to Baxians, too long starved of fresh, orchestral soul-food.