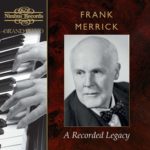 That pianist was Frank Merrick, who was born near Bristol in 1886 and was Bax’s junior by only three years. Merrick studied with Theodor Leschetizky in Vienna at the turn of the 20th Century and then taught at the Royal Manchester College of Music from 1911 to 1929 after which he taught at the Royal College of Music where his students included Alan Rawsthorne and Thomas Pitfield. Merrick was a principled artist and human being who was imprisoned during the First World War as a conscientious objector. During that time he learned Esperanto, which remained a life-long passion to the point that he even wrote several songs with texts in that language. He was also a supporter of the suffragette movement and he was an early advocate of the music of the Irish composer John Field. He seems to have had a significant concert career but most of his recordings come from late in his life when the Frank Merrick Society sponsored a series of private recordings from which this CD set originates.
The recordings mostly date from the mid-1960s and are in stereo. The liner notes indicate the recordings are mostly one-take performances as Merrick wouldn’t have had access to the equipment needed to edit. The recordings were released and distributed by the Frank Merrick Society and were collected by admirers of the pianist and by those with an interest in the unusual repertoire he championed — specifically the music of Bax, John Field and Max Reger as well as his own compositions This set has gathered all the available recordings from those existing LPs that could be restored and that also represent Merrick’s playing in the best possible light. Luckily, his set of the Bax piano sonatas met both criteria.
Bax’s music first appeared in Frank Merrick’s concert programs as early as the mid-1920s. Merrick and Bax were on close enough terms for the composer to be able to tell the pianist that he preferred many of his performances to those of Harriet Cohen. Bax also dedicated his “Paean” to Frank Merrick, which the pianist recorded and is included in this set. Merrick wasn’t the first to record the Bax sonatas as that distinction belongs to Iris Loveridge, who recorded Bax’s piano works in the early 1960s for Lyrita in mono sound. Knowing of her strangely possessive attitude toward the music, Harriet Cohen must have been irked to see the release of two sets of Bax piano sonatas while she was still alive or perhaps a little sad that she never had the opportunity to record the music that she had inspired and championed. By the mid-1960s, Cohen was well past her prime and no longer playing in public and to some degree, the same was true of Merrick although he obviously still possessed enough technical ability even in his 80s to warrant these late recordings.

Absolutely, there are numerous companies where you happen to be able to purchase essay cheap, but we’re not confident you will purchase first essays there. They could buy documents online in a variety of manners. The ideal place to purchase documents is at Essay – Writing – Support – Help. At research paper writer, you’ll locate everything related to your own documents. Buying documents hasn’t been so easy Where to purchase essays which could be the query which you have on your own head. Attempt to locate some area where to get documents that’s truly fair and severe. Only send us an order at any time and we’ll care for your composition paper! In spite of the reputation of purchasing essays online, it can be a truly scary procedure especially as most of the function occurs slightly, without genuine contact along with the writer. If that’s the circumstance, you have to earn a decision and the top pick left for you is always to purchase custom essays. Thus, now you must make a decision as to what choice to make and what’s an ideal area to purchase essays.

So how does the Merrick set compare with the other sets of the Bax sonatas? It’s unfair to compare him to such contemporary pianists as Michael Endres and Ashley Wass who both had the benefits of modern technology to assure their performances were as polished and note-perfect as humanly possible – or almost possible as there remain the occasional mis-reads in Wass’s otherwise immaculately prepared performances. Merrick’s recordings are essentially live performances in good but not great stereo sound. In this regard he has the advantage over Iris Loveridge, whose mono recordings sound very primitive even for the early 1960s vintage. Where Loveridge has an advantage is that she was recorded when she was obviously still in her prime as a pianist. I have no idea how much editing was done on her recordings but she exhibits a technical fluency and assuredness that the much, much older Merrick obviously can’t match. However, given a few allowances for some occasional insecure playing and wrong notes, the performances are nothing short of excellent and at times, revelatory.

It’s my guess that the Second Sonata was a constant in Merrick’s repertory as it receives the most impassioned and securely played performance of the set. This is a white-hot account that is relentless in its forward drive. Merrick allows for moments of calm and reflection to register but the pacing never lags and the drama between those opposing forces of light and dark that characterize this particular sonata are intensely and effectively characterized. It’s easy to understand why this particular sonata became the most popular during Bax’s lifetime if this was the standard this particular sonata was receiving. I remain very partial towards Ashley Wass’s hugely expansive account which is superbly played and recorded but is also very individual and the antithesis of Merrick’s recording, which I suspect is closer to what Bax actually intended.

The performances of the other sonatas are likewise excellent even if they don’t achieve the brilliance of the performance of the Second Sonata due to slightly less secure playing in the First and Third Sonata and strangely deliberate tempos for most of the Fourth Sonata. My guess is that Merrick was coming back these sonatas after many years of not having played them and the fact they were be recorded in one take means there is an air of hesitancy and caution that is at odds with these impassioned works. Nevertheless, the performances are all wonderfully straight forward with details and musical lines all clearly delineated due to Merrick’s meticulous attention to voicing.

In my opinion, there is no one set of the Bax sonatas that is completely successful. Eric Parkin is marvelous in the smaller pieces but his playing of the big sonatas are mostly light-weight and under-powered. The Malcolm Binns set for the British Music Society is excellent but difficult to track down. Loveridge and Merrick are historic choices and I wouldn’t want to be without either. Loveridge includes most of Bax’s published piano pieces in brilliant performances that in many ways remain unrivaled. Merrick plays a handful of the smaller pieces, all extremely well played too and it’s wonderful to hear the dedicatee of “Paean” really bring it home. Loveridge’s disadvantage is the ancient sound but the recordings have been successfully remastered by Lyrita and if I had only one set to choose, it would still be hers. Ashley Wass and Michael Endres are the real heavy hitters in that they are probably the most accomplished pianists to record complete sets – at least until Mark Bebbington delivers us his set. Wass’s way with Bax is expansive and romantic whereas Endres is more classical and objective. I prefer Endres in the First and Third and Wass in the Second whereas both are superb in the Fourth Sonata. Endres gives us the Symphony Sonata as a wonderful bonus while Wass includes recordings of some of the smaller pieces in his set.

Those who buy the Merrick set will certainly be getting their money’s worth as it includes a wide range of repertoire including substantial amounts of Debussy, Reger and Field as well as some of his Merrick’s own pieces. and they all possess the same no-nonsense, objective and high-octane playing that characterizes his Bax. It’s an essential set for any devotee of great piano playing from the first half of the 20th Century. Some allowances will need to be made for the technology and the pianist’s age but for little else. Nimbus is to be praised for resurrecting these classic recordings.