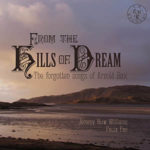 Superlative liner notes from Graham Parlett, added to full texts and a loving presentation from EM Records, make ‘From the Hills of Dream’ an attractive prospect. But does the music of Bax’s forgotten songs justify such quality treatment? Christopher Webber asks the question …

‘From the Hills of Dream’

The forgotten songs of Arnold Bax

The maturing of the classical recording market, reflecting the maturing of its consumer base, has led to a curious reversal of values. As far as British music goes, producers sometimes seem to think that we have all the versions we need of the core canon of Vaughan Williams, Britten and company; and a culture of novelty has emerged, in which time and money are spent on making minor works and unpublished juvenilia available at the touch of a button. Of course, novelty appeals to completists – of whom I am unashamedly one – but sometimes even completists ought to draw the line, and ask whether this culture does anything to advance the cause.

For every speck of gold, we must sift through skiploads of dull mud; and there’s a feeling that well-intentioned producers might occasionally work harder to do the sifting for us. Too often we suffer the triumph of hope over reality. Might it not be better to concentrate on new interpretations of first-rate music, rather than quarrying third-rate minutiae? As a rule it is right to be truly thankful for what we receive; but even as a fully-fledged Baxian, I must confess that unthankful thoughts passed through my head during EM Records’ recital of forgotten songs. Bax’s songs are far from central to his output, and it must be said that some of the music here should have been allowed to rest in quiet obscurity. Certainly nothing approaches the quality of ‘The White Peace’, ‘I heard a piper piping’ or ‘Cradle Song’ – three first-class songs in need of good, new recordings for our time.

More positively, a handful of the eighteen tracks on this generously-filled CD possess real charm. The melancholy reflections of ‘Leaves, Shadows and Dreams’, ‘Longing’ and the titular ‘From the Hills of Dream’ have a rapt Celtic beauty well worth salvaging, while illustrating the point that more interest lies in the silver filigree of the composer’s piano writing, than in his vocal lines. Nearly everything is slow and steady – comparison of the ruminative ramble of ‘The Splendour falls’ with Britten’s quick-fire sunset is not to Bax’s advantage – and his pawky humour in the interminable ‘A Rabelaisian Catechism’ and ‘Le Chant d’Isabeau’ falls tediously flat. The Oirish misogyny of ‘The Grand Match’, which opens this chronologically-arranged recital, is just about juvenile enough (from a 19-year-old) to be forgiven and forgotten. At the other end of the timeline, the setting of Hardy’s sardonic ‘Carry Clavel’ at least has the virtue of brevity – as does ‘A Leader’, Bax’s bitter salute to the Irish Nationalist Charles Stewart Parnell.

If the disc is to be cherished, it is not so much for the musical contents as for EM Records’ quality presentation, which features full vocal texts (with translations from French, German and Danish as needed) plus a colour reproduction of the vivid, mid-life sketch of Bax by ‘Wilson’. This is from the late Graham Parlett’s estate, and here we come to the true gold of the collection, one of the last projects completed before Graham’s death. His wonderfully erudite, full and fascinating notes on the individual songs tell us more about Bax’s life, world and literary tastes than half-a-dozen biographies, and the disc’s dedication to his memory is movingly apt.

I wish I could say that the performers amplified the muted attractions of Bax’s material, too; but although we can be grateful for Paula Fan’s straightforward projection of the piano writing, it is hard not to feel bewildered by the contribution of the eminent baritone Jeremy Huw Williams, whose voice – on the limited evidence of this close-miked but clear recording – is suffering a distressing decline in tonal and verbal quality. Even his delivery of the intriguing recitation ‘The Twa Corbies’, spoken in peculiarly operatic Queen’s English rather than the intended Borders dialect, fails to convince. All of which adds to my conviction that Baxians will be turning to this issue more often for Graham Parlett’s unforgettable booklet essay, than for the forgotten music itself.