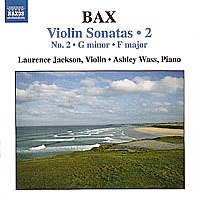 
Having been much impressed by the first volume in this series, I am pleased to report that volume 2 is fully up to the same high standard. Jackson and Wass play with a rare understanding of Bax’s music and offer insights into these scores that are not revealed in rival recordings. The CD opens with the dark and restless Second Sonata of 1915, revised in 1921. The players’ scrupulous attention to detail is revealed in the opening page in which the sonata’s principal motif (also used in the tone-poem November Woods) is first announced. The second of the four linked movements, entitled ‘The Grey Dancer in the Twilight’, has just the right pace, and the players make the most of the long and expressive slow movement before plunging into the headstrong finale, which starts in the unusual time signature of 11/4. All in all an excellent performance, better than the Chandos and ASV versions and rivalled only by Tasmin Little and Martin Roscoe on the GSN label (coupled with Elgar’s Violin Sonata).


Both the Legend of 1915 and the Ballad of 1916 have been recorded twice before: by Henry Holst and Frank Merrick on a long-deleted LP and by Robert Gibbs and Mary Wu on an ASV CD. They are both dark scores, reflecting the times in which they were written, and these new versions bring out their restless quality better than the earlier ones.


The one-movement Sonata in G minor https://cialtad.com (1901), which Bax wrote at the age of eighteen, has been recorded once before, again by Gibbs and Wu on the ASV disc, but this new version takes an altogether livelier view of the unpublished score. The work is well constructed and contains some attractive melodic material, especially the memorable second subject. A student work it may be, but both players tackle it as if it were a great masterpiece and fully justify its resurrection, though, as in the case of the early Trio in One Movement, Sir Arnold himself would probably have been horrified at the idea of his juvenile thoughts being heard by the public.


The final work on this splendid disc is the Sonata in F, which was written in 1928 but never played in this form until his centenary year (1983); he later arranged it as the Nonet (or Nonett, the German spelling, as the manuscript and the first printed edition have it). The only rival version of the piece is again by Robert Gibbs and Mary Wu on ASV, but this new performance is much livelier, making us forget the music in its more familiar incarnation. For what it is worth, I compared the timings of all the works on this CD and found that every single movement was played faster than in the ASV versions.


In short, another winner from Jackson and Wass: first-rate performances, extremely well recorded, and with notes by a certain Lewis Foreman. Having disliked the Victorian watercolour on the front of Ashley Wass’s last disc (the two-piano music), I am glad to see an attractive photograph of the Donegal coast on this issue: much more appropriate. Grateful thanks once again to Naxos for their obvious confidence in the selling power of Bax’s music.