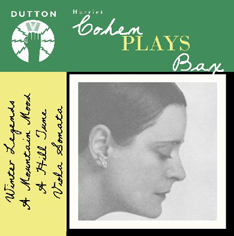 I first heard this performance of Winter Legends in 1967, when Lewis Foreman kindly gave me a reel-to-reel tape of it; the original was on acetate discs owned by Harriet Cohen, who died later that same year. I was bowled over by the music and played it endlessly on my very first tape recorder (a Truvox), until eventually the tape snapped, so that for a long time I could only listen to the first movement in truncated form. In the early 1990s (I forget exactly which year, but I remember it was advertised – in very small print – in Gramophone), an obscure American company called Connoisseur Cassettes issued it on tape cassette in poor-quality sound, with the conductor wrongly listed on the label as ‘Sir Adrian Boult’. By that time the work had received two broadcasts, conducted by Raymond Leppard (in 1978) and Vernon Handley (in 1981), with John McCabe as the soloist in both performances, and had been commercially recorded by Margaret Fingerhut with the LPO conducted by Bryden Thomson (first issued in 1987 coupled with Saga Fragment). This was one of Chandos’s least successful attempts at taming the resonant acoustics of All Saints Church in Tooting, but Miss Fingerhut’s recording is highly recommendable not only for the sake of her splendid performance but also for the inclusion of two passages that were cut by Bax and are omitted in all the other performances known to me. (The first cut, in the second movement, makes little difference either way, but the second passage, in the finale, holds up the musical argument, and I think it is better for the music to be left out.) John McCabe’s two performances were also very fine, and it was a strange experience coming back to Miss Cohen’s BBC broadcast after so many years. (She actually played the work twice, on consecutive days in November 1954, and this is the earlier version.) In the event, any anticipatory qualms I might have had about the performance proved unfounded. It remains a really fine interpretation with some magnificent playing from both the soloist and the orchestra.


From the very opening upward sweep of the piano nobody can be left in doubt thatWinter Legends is going to be one of Bax’s most powerful scores, and Miss Cohen plays it with great vigour. Her tempi are generally broader than Margaret Fingerhut’s and she combines muscular powerful with a delicate touch when required. I especially like the way she plays the quiet concluding bars around 8:52 in the first movement, just before the orchestra enters, and the main melody of the second movement is played with an attractive lilt. Since it is a live performance, there are inevitably a few wrong notes – the side drummer plays an extra couple of notes near the end of the first movement, and in the slow movement the solo horn misses his cue and comes in a few notes late – but these are amply compensated for by the magnificent overall sweep. Clarence Raybould conducts with great authority, and it is clear that Bax held him in high regard. In the January 1947 issue of The Music Teacher and Piano Student (p.13) he wrote: ‘My strongest musical impression of 1946 is Clarence Raybould’s remarkable feat of conducting a long and very difficult work of my own after seeing the MS score for the first time the previous evening. He was called upon to deputise at the eleventh hour, and the performance went without a mistake and with perfect understanding on the part of the conductor’. The monophonic sound here is very good for a 1954 broadcast. There are inevitably some background ‘frying’ noises, but the ear soon adjusts, and the timpani, in particular, come across with startling clarity (just listen to the sinister passage around 5:00 in the slow movement).


The other substantial work on this disc is the Viola Sonata, with William Primrose, which is also currently available on two other CDs (issued by Pearl and Doremi) and will be familiar to many people. Again Harriet Cohen plays with vigour or delicacy, as required, and Primrose matches her at every turn. This is a really fine performance, less rushed than the composer’s own with Lionel Tertis and with a better balance between the two instruments. (Bax sounds as if he has been recorded in another room from Tertis and sometimes plays as if he had been eager to get the thing out of the way so that he could go home.) The Dutton transcription is excellent, with little surface noise, and I enjoyed renewing my acquaintance with the performance.


The two solo piano pieces that make up this well-filled CD are both played with great sensitivity, and it is especially good to be able to hear A Mountain Mood played by its dedicatee and with such feeling. The second half of A Hill Tune is slower than in any other performance I have heard, as if Miss Cohen is reluctant to leave the enchanted mood that her beloved composer has created. How sad that she never recorded any of his piano sonatas.


The transcriptions by Michael Dutton are all very good indeed, the informative notes are by Lewis Foreman, and the back page of the booklet is adorned with a ravishing photograph of the pianist; no wonder Bax fell for her. This contrasts with the famous 1920 photograph, reproduced on the previous page, where she stands gawky and unsmiling next to Bax in the street ( Regent Street , perhaps?). This is an indispensable issue, highly recommended to all Bax enthusiasts. I understand that a second volume of Harriet Cohen’s commercial recordings may be forthcoming.