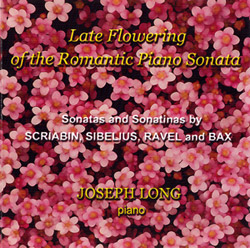 
Joseph Long is no bog-standard virtuoso. Technically, his sparing use of legato and cantabile make for an austere sound far from the norm, suggesting at times a sort of Scottish Glenn Gould. I was intrigued to learn more. His articulate liner notes for this imaginatively planned recital proved completely self-effacing, and I had to visit the website http://www.josephlong.co.uk for some biographical facts. Aberdeen-born, Cambridge-educated Long studied for nine years under Ronald Smith (1922-2004), the English pianist largely responsible for putting the eccentric romantic composer Charles Alkan back on the map. As a student in Canterbury I was lucky enough to hear Smith playing Beethoven at the Gulbenkian Theatre, and he seems to have passed on to his pupils – who include Freddy Kempf as well as Long – the courage to serve music up directly and plainly, without pianistic garnish. It can be disconcerting, but it certainly makes you sit up and listen.


For sure, little here is easy on the ear. As with Gould the close-miked sound may be in part responsible, but not wholly. It’s more to do with style. The grand gestures of Scriabin or Bax are tightly controlled under Long’s cool fingers, which keep these brazen romantics on a curiously tight rein. Whether in Sibelius’s undervalued chips from the workshop bench (by-products from fashioning the dark profundities of the 4th Symphony), or in Ravel’s pellucid classical essay, he seems intent on making us admire structural felicities. His Ravel lacks charm, and if something of the same could be said for the rest of the programme that isn’t always to its detriment – as witness Scriabin’s 5th Sonata, rescued from emotional miasma by Long’s instinct for colouristic clarity. I’ve honestly not been so impressed by this work before.


Bax’s Russian-inspired Sonata No.1 – the third work on the CD in F sharp minor, perhaps the romantic key par excellence – gets a performance like no other in the catalogue, and one which leaves me intrigued. Phrasing is often choppy and short-winded, cadential notes are cut off in their prime, there is a lack of dynamic ebb and flow which ought by rights to be fatal to the sonata-drama. Yet though it goes clean against the grain, I came away from Long’s performance with a fuller sense of Bax’s complete mastery of his material. This is certainly no rhapsodic outpouring, no imperious show of virtuosity, but a cleanly considered reading which despite its halting sense of poetry forces us to listen in a different way. Like Frank Merrick before him, Long brings a personality to the Sonata No.1 which transcends most of the technical quirks; and though he does not match Merrick’s wide emotional compass, his performance has its own focus. I for one have been refreshed by this uncompromisingly cerebral approach to Bax’s rich and strange musical world.