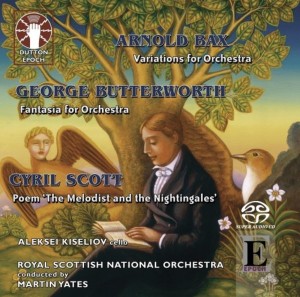 Bax: Variations for Orchestra and works by George Butterworth and Cyril Scott (all premieres)

Martin Yates continues his resurrection efforts on behalf of British composers by giving us a disc of recorded premieres including a Fantasia for Orchestra by George Butterworth, a tone poem for cello and orchestra by Cyril Scott and the very early Variations for Orchestra by Arnold Bax. The later work was only heard once in Bax’s lifetime – conducted by the composer himself in 1905 and then un-played until 2014 when it was performed by the BBC Concert Orchestra conducted by Yates at Em Marshall’s English Music Festival. Likewise the Scott reverie for cello and orchestra was premiered by Beatrice Harrison in 1929 and then forgotten. The Butterworth Fantasia is the completion of a manuscript containing 93 fully-scored bars that the composer left among his papers before leaving for the war from which he would never return. It was inspired programming on the part of Dutton to record these three extremely obscure works and I suspect we have the great Dr. Lewis Foreman to thank for encouraging Dutton to bring these works back to life.

We certainly have Mr. Foreman to thank for the latter-day preservation of the early Bax orchestral Variations. The score had been in the possession of Bax’s sister Evelyn presumably since the composer’s death in 1953. She gave the manuscript to Lewis in the early 1970s who in turn gave a photo copy of the manuscript to Graham Parlett to edit and print. As some point, Martin Yates was made aware of the score and decided he wanted to conduct it, which he did with the BBC Concert Orchestra in 2014. That performance was broadcast over BBC Radio and was enthusiastically received by the English Music Festival audience and also Michael Dutton, who then agreed to record it for his label in 2015.

This recording features the Royal Scottish National Orchestra and their playing here is immaculately prepared and assured in all departments. Yate’s interpretation has all the breadth and intensity this work needs to hold one’s attention – and that it most certainly does, especially toward the end when an organ is added to underline the pomp and circumstance mood. That the Variations sound nothing like mature Bax is going to surprise no one. He wrote them when he was 21-years old and just falling under the spell of Ireland and W.B. Yeats. The influences here are certainly Elgar and in places a few of Bax’s beloved Russian composers. The main theme is stirring if not memorable and Bax’s handling of the variations is astonishingly confident. This work gives the impression of a very young composer flexing his muscles and demonstrating his impressive technical knowledge. What is lacking is that extra inspiration to fire his imagination into producing something really personal and distinctive. That would come soon, however, with his immersion in the world of Yeats and his discovery of the Celtic faery lore.

Baxians will want to hear this disc for the Variations but the other works on the disc are just as interesting. The Fantasia for Orchestra by George Butterworth is an orchestral work left incomplete due to the composer being killed in the Battle of the Somme in August 1916. Those familiar with Martin Yates’s completion of Moeran’s Second Symphony will know of his ability to recreate a composer’s sound world and that he most certainly does here with Butterworth’s Fantasia, which required Yates to compose a substantial amount of music in order to create a finished work. We have so little orchestral music by Butterworth that it really is great to have this Fantasia added to the repertoire and the music itself is delightful.

Cyril Scott’s tone poem The Melodist and the Nightingale was written for Beatrice Harrison and premiered in 1929. Thankfully no restoration work here was necessary and the work itself has an almost hypnotic effect as the cello line meanders amid very atmospheric and gentle orchestral support. The cello writing is expressive and songful and Aleksei Kiseliov – the principal cellist of the RSNO – is masterly in his ability to hold this entrancing if slightly overlong work together.

Dutton succeeds yet again to offer a disc of worthwhile music that is superbly played and recorded. Not even Lyrita in its heyday was as adventurous in its programming and I’m pleased to see Dutton’s engineers producing a warmer sound from the Henry Wood Hall in Glasgow. Now that Chandos appears to have concluded its Bax series, Dutton should consider providing us with those few works by Bax that remain unrecorded or perhaps record a disc of Bax tone poems in their original versions such as Christmas Eve in the Mountains and In the Faery Hills. That would make a fascinating disc and Yates is just the conductor and the RSNO just the orchestra to bring it all off splendidly.