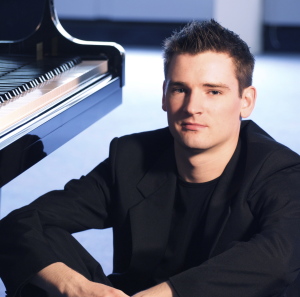 
Editor’s Note: Michael McHale is unquestionably one of the most exciting and active young British pianists performing today. He is in demand as a solo and chamber player as well as an accompanist and he has nearly a dozen CDs currently out on the market. Michael was born in Belfast, Northern Ireland in 1983 and he received his music education at both Cambridge and the Royal Academy of Music. He won both a first prize and the audience prize at the prestigious Terence Judd/Hallé Award finals in 2009 (previous winners include Nikolai Lugansky and Stephen Hough), and he was awarded the Brennan and Field Prizes at the 2006 AXA Dublin International Piano Competition and the 2005 Camerata Ireland/Accenture Award. His teachers and mentors include John O’Conor, Réamonn Keary, Christopher Elton, Ronan O’Hora and Barry Douglas. Bax music has been featured in several of his recordings and below he discusses his career as well as experiences playing Bax’s music.


Richard Adams: The last couple of years has seen your career really take off with the release of several critically praised CDs of your work as a pianist, both as a soloist and accompanist. Has it always been your ambition to be a recording artist or did it just happen?


Michael McHale: My main motivation and love has always been giving concerts – but since I have begun recording more regularly over the past few years, I have learned to appreciate and enjoy the process more and more, and to discover the different artistic opportunities that it can offer. In short, I now wouldn’t want to be without either – so hopefully I will continue to record and perform live in equal measure.


RA: You were born in Belfast and you studied in Dublin as well as at Cambridge and in London. Do you identify yourself as an Irish pianist and if so, what does that mean to you? Are there any special traditions that are associated with being an Irish-born pianist?


Michael McHale: Certainly I would describe myself as Irish – and I have also been greatly influenced by many wonderful Irish pianists from other generations. I’m not sure if it’s helpful to try and identify specific traditions in terms of Irish piano playing, or a piano school as such, but a key figure whose shadow looms large for all Irish pianists would be John Field (although ironically he provided equal inspiration for the great Russian piano tradition, having spent most of his final years teaching and performing there!) For my own part, it has been inspiring to see artists such as Barry Douglas and John O’Conor break new ground internationally, and I’m fortunate that they have both been incredibly generous and supportive of me in my career.


RA: A quick review of your CDs as well as your website and YouTube postings indicates a pianist with an enormous range of interests and abilities that include jazz, folk, and classical from all time periods. Are you committed equally to all those genres or do you see yourself specialising in one particular area and if so, what would it be?


Michael McHale: I love a wide variety of music – and for me really there are only two genres of music that are important: music that I like and music that I don’t! But in terms of my professional life, 95% of my energy and focus is reserved for the classical repertoire, also encompassing some contemporary works, whilst everything else I do is simply for my own pleasure and relaxation!


RA: Judging from the programs of your recordings, you seem to have a special affection for music of Ireland and the British Isles. Is that a long held interest or something relatively recent?


Michael McHale: This is something that has come about gradually – when I was a young piano student I studied very little British and Irish music, except for a few Field Nocturnes. Since studying at Cambridge I became exposed to more British music, and that led me to develop a closer interest in the music of my native Ireland as well – there is certainly a lot of wonderful music from these islands that is unjustly neglected.


RA: I first came to know of you when you released a disc with the Avalon Trio in which you recorded the Piano Trio of Bax along with trios of Beethoven and Bernstein. It was a great disc and since then you’ve recorded Bax’s thorny Piano Quartet as part of the Cappa Ensemble and also the Clarinet Sonata with Michael Collins on Chandos. Your wonderful solo album, “The Irish Piano” also includes Bax including the premiere recording of an early Nocturne. It would appear you have quite a liking for Bax ‘s music. If so, what draws you to his music?


Michael McHale: I think the first thing that attracted me to Bax’s music was his use of harmony. I found many of his chord progressions to be so novel, unusual and appealing that I found myself immediately drawn into his unique harmonic sound world. He also experiments with quite radical and unorthodox formal structures, which at first glance can seem difficult to interpret. Yet by really living with the music, getting inside it and experimenting as a performer with different approaches to all the possible nuances of tempo and momentum, I’ve generally found that each and every one of these intriguing structures has a strong internal logic and can create a very satisfying and convincing whole.


RA: Does Bax’s association with Ireland play any part in your interest in him?


Michael McHale: I was fascinated to find out about Bax’s love of Ireland, and it certainly piqued my interest. I think it’s probably fair to say that he remains the only person to have a written a volume of Irish, Republican-sympathetic poetry (which was banned in Britain) and to subsequently go on to receive a knighthood! His relationship with Ireland and the Irish, whilst sometimes idealised, romantic, and certainly very complex, seems to have been incredibly heartfelt and genuine. It is an amazing and unusual story.


RA: Do you have any interest in performing or recording any other Bax works and if so, what specifically?


Michael McHale: I have no plans to do so at the moment, but I’m always open to exploring Bax’s music further, both in concert and on record, so hopefully I’ll be able to do so in the future.


RA: Few recent CDs have given me as much pleasure as your first solo CD, “The Irish Piano”. How did that CD come about and how did you come up with the program?


Michael McHale: It’s a project that I had been thinking about for a long time, and it all came together over the last couple of years. My main aim was to create a varied programme that would reference many facets of Irish and Irish-inspired piano music. Of utmost importance for me was that the flow from track to track would be as natural and coherent as possible, so that it would feel like a real album, rather than simply a themed collection of disparate piano works. This was particularly relevant due to the fact that the disc comprises many short pieces rather than a few large-scale works.


RA: You play several of your own arrangements on that disc. How did you choose which folk tunes to arrange and what is it about Irish folk music that gives it such a special character?


Michael McHale: I wanted to ensure that each of my own arrangements had its own distinctive style or approach, so for that reason I didn’t want to include too many of them! Two of the tunes are diatonic, and the other two are in the mixolydian mode. My Lagan Love is particularly interesting in that it also includes some unusual chromatic inflections, so for that reason I explored much more chromatic harmonies in my arrangement. All four melodies are really beautiful and striking in their simplicity.


Michael McHale: When I was a student at Cambridge I did some composing – the most ambitious project I undertook was an hour-long score for a theatrical production (Cross Road Blues written by my friend David Hall), featuring solo violin, double bass, two guitarists, two percussionists and a 20-piece choir. It was thrilling to see it performed, first in the Bridewell Theatre, and then the Hackney Empire. I would love to find the time to do some more composing in the future, but I don’t think it will happen any time soon.


RA: You evidently love chamber music because in most of your recordings you either serve as a member of an ensemble or an accompanist. What is it you like about working with other musicians?


Michael McHale: I feel that collaboration is one of the most rewarding aspects of music-making. One is always listening and reacting to the other musicians, and vice versa, which leads to a never-ending source of creative spark that I find really exhilarating. It is of course also possible to experience the same sensation when collaborating with a great conductor and orchestra, but chamber music is perhaps the most genuinely interactive musical experience. It’s also worth noting that a pianist’s existence is rather solitary at the best of times, so it is much more sociable to tour with a chamber group, or with an orchestra, than it is to play solo recitals all the time, especially when performing with colleagues who are also good friends.


RA: How did your association with Michael Collins come about and how is it to be recording so much British music for clarinet?


Michael McHale: We worked together for the first time at Barry Douglas’s 2008 Clandeboye Festival in Northern Ireland, and have performed concerts regularly since then. He is an incredible artist and it is always a joy to work with him. Michael has been recording what seems to be almost the entire clarinet repertoire for Chandos at the moment, so it has been great to discover and explore all of these wonderful British works which formed the basis of our two most recent albums.


RA: Your most recent disc is with the Cappa Ensemble on Nimbus Alliance. It includes the Bax Piano Quartet, which I take was quite a challenge to prepare although the recorded performance is wonderfully polished and convincing. What makes this work so difficult to perform?


Michael McHale: With much of Bax’s output, the most challenging aspect for the interpreters is to judge the flow and pace of each section convincingly, so as to create a coherent and satisfying whole. This is particularly true of the Piano Quartet as it is a one-movement work with many different tempo markings and myriad moods and atmospheres. We spent a lot of time discussing and rehearsing many different approaches to the work before we became really comfortable performing the music together.


RA: What have you been doing this past year?


Michael McHale: My solo engagements included appearances with the Ulster Orchestra (Liszt Concerto No.2), RTÉ National Symphony Orchestra (Gershwin Concerto) and the Irish Chamber Orchestra (première performance of a newly-composed piano concerto by Garrett Sholdice). In terms of recording, my fourth album with Michael Collins was released in January 2014 to coincide with our Wigmore Hall recital together, and we are recording the Brahms Sonatas later in 2014. I also have a couple more solo recording projects to look forward to, but you’ll have to watch this space for more details of those in the coming months!