Summer Night on the River, I.      On Hearing the First Cuckoo in Spring; Elgar: King Olaf – Chorus “As Torrents in Summer” 2;

[Rec. 5-6 November 2005 BBC Studio 7, Manchester . Andrew Keener (producer), Simon Eadon (engineer)]
So there’s Andrew Keener and Mark Elder, tired but happy after a couple of days’ hard graft in Studio 7, cogitating over the coffee to dredge up a marketable title for the Hallé’s latest… English Landscapes is hardly a bulls eye for a disc taking in Bax’s great seascape, a French aquatint from Delius and two pieces – First Cuckoo and the chorus from King Olaf – distinctly Norwegian in inspiration. Finzi’s sensitive meditation concerns itself with seasonal soul-searching rather than landscape. Only the two Vaughan Williams pieces and Ireland ’s miniature could in any useful sense be described as English landscapes. 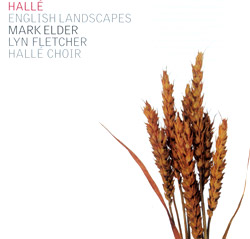 I supposed somebody must have planned it, but that’s hard to fathom beyond the vague thought of yoking together some attractive, short English tone poems and choral gobbets. There’s little in the way of a common thread, and Michael Kennedy’s notescarcely tries to pull the strands together. We’re presented with a cleanly recorded, well played collection of mainly slow movements, but where’s the centre? And why are Delius’ masterly Two Pieces played the wrong way round? They make more sense in the order their composer intended. Having nodded appreciatively towards Lyn Fletcher’s delicately self-effacing flight in The Lark, highest praise is due to Elder for his advocacy of The Fall of the Leaf, played for all its melancholy worth, and to the Hallé Choir for verbal clarity and perfect tuning in Ireland’s tricky closing vignette The Hills, from the under-appreciated communal 1953 Coronation Garland for the Queen.

Tintagel is first up, rightly so as it is the longest, largest and most emotionally varied canvas on offer. It makes a brilliant showcase for the virtuoso orchestra, and for Simon Eadon’s deft technics – the flecks of harp and pizzicato string sea-spume just after the 3′ mark register nicely. But at nearly 17′ this is the slowest Tintagel on record, and though the grandeur is initially compelling, the turbulent central section soon runs out of steam. Elder’s iron control matches Handley’s on Chandos but misses his sense of architectonic inevitability, let alone Barbirolli’s surging tides of emotion. It’s a cool, precise reading which never amounts to more than the sum of its sonically impressive parts. By the end it’s hard to feel that either conductor and orchestra were engaged heart and soul, either here or in the remainder of this disappointingly unfocussed landscape portrait.