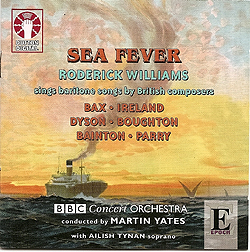 While recordings of Bax’s orchestral, chamber and solo piano music continue to proliferate, the same can’t be said of his vocal music, and in particular his songs.  Bax has never been considered among the great British “song” composers but a quick glance at Graham Parlett’s indispensable Catalogue indicates Bax wrote more than 100 songs for voice and piano as well as an assortment of songs for orchestra or string quartet.   Yet, of all these songs, only a handful have acquired any sort of popularity with singers or the public – the most famous being “The White Peace”.   The Bax songs on this new Dutton disc do give some indication why this may be while at the same time indicating Bax had the makings of a potentially great composer for the theater and it’s a shame he never completed any of his early attempts at composing an opera.

The first thing that must be said about this enterprising new recording featuring the warmly expressive voice of baritone Roderick Williams is that the three Bax songs stick out like lions among lambs when heard along side the gentler, more lyrical settings by Ireland, Dyson, Boughton and Bainton and it makes for a rather strange listening experience to hear all the songs together as the Bax settings are so much more theatrical.

Take “The Song of the Dagger”, for instance.  While on first hearing it comes off as something of a tempest in a teapot, it is in fact a very exciting and imaginative setting of a rather odd poem about a dagger with a life of its own.   The text is taken from the collection of Romanian folk poetry called “The Bard of the Dimbovitza” (that Bax also used for his orchestral song cycle of the same name for mezzo-soprano) and it inspires from Bax an orchestral accompaniment that is wildly barbaric and overtly dramatic.  But, it sounds as though it should be part of something bigger like a song cycle or opera. Williams sings it for all it is worth although even he can’t make the awkward octave drops on the word “blood” sound very convincing.  Otherwise Williams gives a most virtuosic performance of a very demanding song.

The other Bax songs on the program are likewise blessed (or cursed depending upon your tolerance for intricate chromatic harmony) with accompaniments that again give these works a very theatrical flair.  Bax’s “The Viking-Battle-Song” is another vivid setting of a pagan poem by Fiona Macleod and in Graham Parlett’s stunningly authoritative and barbaric orchestration – it shows that even this early in Bax’s career, he had an unrivaled ability for conveying pagan splendors and horror.   To my ears, Bax’s setting of Chaucer’s “Welcome, Somer” is less memorable because here the harmony veers a little too close to Delius without providing much in the way of a memorable melodic line.  The fault is certainly not in the orchestration by Graham, who again manages to give the song what little true Baxian color it has.

Admittedly, for me at least, that same can be said about many of the songs on this disc.  While the settings by Boughton, Bainton and Dyson are undeniable beautiful and easy on the ear, I can’t say any of them struck me as distinctive.   In fact, returning to the Bax songs after a first play through of the disc made me realize how bloodless many of the other songs in the program seemed to be.   I should admit straight up that I’m not a connoisseur of English songs so take what I say with a grain of salt but to my ears, I don’t hear in these works anything approaching the level of genius that one encounters in the settings by the really great song composers like  Butterworth, Finzi, Warlock or Vaughan Williams – but then why do they need to?  Those more in sympathy with this idiom will no doubt find much to enjoy here.

While the Bax songs may be the most interesting, I would quickly add that the songs by John Ireland are the highlight and most successful on the disc.  Ireland certainly deserves to be ranked among the great British song composers and like Bax, he had a remarkable gift for creating the most haunting and original harmonies while avoiding the heavy accompaniments that make some of Bax’s songs impenetrable.  This disc is worth its price for the Ireland songs alone and again the orchestrations by Graham Parlett, Gerrard Williams, Denys Darlow, Frederick Bye and Eddie Griffiths are very faithful and idiomatic.

Baxians should hear this disc because Williams is such a sympathetic singer and Martin Yates and the BBC Concert Orchestra manage the accompaniments well although I’m sure with greater familiarity, they would have brought even more fire to their playing.  A  bonus on this disc is the Parry duet for baritone and soprano (Ailish Tynan) from his unfinished opera, “Guenever”.  It seems from an entirely different era from the other songs in this program, as it was composed in the early 1880s, but I found it quite fascinating to hear even if the result does confirm Parry’s opinion that the work wasn’t worth completing.  Jeremy Dibble reconstructed the duet from Parry’s sketches.  The production of this disc is absolutely first rate with Lewis Foreman providing his usual authoritative notes and the engineering by Dexter Newman being warm and detailed.   It’s well worth investigating.