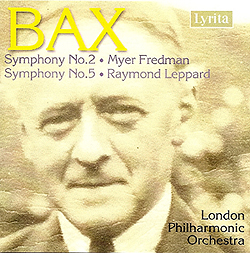 We have Ken Russell to thank for this excellent recording of Bax’s Second Symphony. His interest in the composer became apparent in the late 1960s, and I recall sitting a few rows behind him in the Royal College of Music for the first performance of Cathaleen-ni-Hoolihan in October 1970, with David Chatwin (now principal bassoonist with the BBC Philharmonic) conducting a student orchestra. Russell was then engaged on filming The Devils and had recently approached Richard Itter of Lyrita with the suggestion that Bax’s first two symphonies should be recorded for the first time. With financial assistance from Ken Russell Productions Ltd., the sessions were hastily arranged, with the young Myer Fredman chosen as conductor. Fredman was unfamiliar with the scores and had very little time in which to learn them, a fact that makes it remarkable how well the recordings turned out. Fredman’s version of the First Symphony has been available on CD for several years (SRCD232, coupled with Leppard’s performance of No.7), but this is the first CD release of the Second, and an unqualified success it is too, yielding nothing in performance and sound-quality to the later recordings by Lloyd-Jones and Handley. The LPO play as if they had known the music all their lives, and the recording quality still sounds outstanding after nearly thirty-eight years. The horns are especially fine, while the harp and celesta come through very clearly throughout, and the timpani also have great clarity. The passage in the development section (11:18, pp.53-4 of the score), briefly reminiscent of The Rite of Spring, with the timpani played with wooden sticks, sounds better here than in the later recordings. The impact of the organ is also thrilling in the second and third movements, and only the piano part lacks impact. Fredman’s conducting of the first and third movements is wonderfully incisive and forward-moving without in any way sounding rushed. Once or twice in the slow movement, I found him pressing on just a little too hard (around 4:45, pp.85-8 for example), thus robbing the music of its majesty, but the work-up to the great climax, underpinned by the organ pedal, is very well done. The introduction to the finale is full of tension, which is resolved by the Allegro feroce, with its difficult wide leaps for the violins. (Incidentally, has anyone else been struck by the brief pre-echo of Rózsa’s music for the ‘Burning Desert’ sequence from Ben Hur around 2:00 in this movement?). Once again the finale climax of the movement is tremendous and the slow disintegration towards the end is most effective. This is a first-rate performance of one of Bax’s most noteworthy scores and is well worth the price of the CD alone.

By the time Lyrita came to record the Fifth Symphony in 1971, Russell was no longer involved, and the choice of Raymond Leppard as conductor was unexpected. He was then better known as a champion and editor of early music by such composers as Monteverdi and Cavalli, though he had also written a couple of film scores in the 1960s (The Lord of the Flies and Alfred the Great). But, although he had no track record in conducting Bax, he clearly enjoyed the challenge and eventually gave a performance of the Fifth Symphony at the Proms. He has also conducted performances of Tintagel in the USA, though the only broadcast of this tone-poem that I heard him give was rather dull. This performance of the Fifth Symphony, on the other hand, is very good indeed, though perhaps not quite as distinctive as Fredman’s of No.2. There are one or two small mistakes in the performance (for instance, the bass drum comes in a bar too early just before the Più mosso in the introduction), but these are niggling details, and on the whole it wears very well.  The build up to the main Allegro feroce in the first movement is exciting, and there is a good sense of forward momentum thereafter. The Dolce meno mosso section (actually Dolce poco meno mosso, according to the manuscript) strikes me as being too slow and the music begins to drag a little here; in fact Leppard does have a tendency to make too much of expressive details. But there is also much sensitive playing, especially from the strings, and the big climax on p.39 of the score is exciting.

The slow movement in this performance always used to strike me as beginning at too fast a tempo, but hearing it again after several years I found it less rushed than I used to, though it is a pity that what sounds like a wrong note in the brass on the second page was not corrected in the studio. As with David Lloyd-Jones’s recording, the harp glissando around 3:15 (p.77) is not prominent enough, and at 3:49 (p.79) the side drum is out of sync with the brass (this being a mistake in the printed parts that was corrected for later recordings). 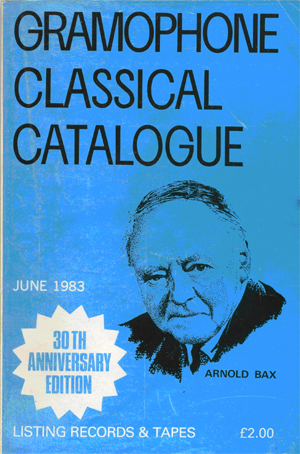 If the slow movement is for me the least inspired in this recording, the finale is certainly a great success. The incisiveness and rhythmic vitality of the Allegro (taken at a slightly slower speed than with Vernon Handley) are most exhilarating, and hearing the slow, lumbering passage that follows I can see what Harriet Cohen was getting at when she remarked to Bax during a performance that it reminded her of polar bears sleepily turning over in the arctic wastes. The Epilogue begins sensitively (though perhaps not quite as serenely as in Handley’s recording) and builds up to a powerful climax and a thrilling ending. Once again the horns stand out very clearly in this recording, while the tenor drum has a really barbaric sound, though perhaps the bass drum could have been less prominent when marked pianissimo.

As with other recent Lyrita reissues, the sound quality on this generously-filled CD is excellent, and the original LP notes by Lewis Foreman (No.2) and Robert Layton (No.5) are reproduced, though oddly in reverse order. The front of the booklet shows a very rare picture of Bax actually smiling for once: a detail from a photograph reproduced in the latest edition of Foreman’s biography showing the composer standing next to Sir Henry Wood. No doubt Bax would have been both bewildered and delighted by the vast discography of his music currently available, When he died, I believe the only orchestral works available on disc were Tintagel and the Coronation March, and it is sobering to remember that even as recently as his centenary year (1983) there were considerably fewer LP recordings available than there are CDs today. The June 1983 issue of the Gramophone Classical Catalogue (which has a drawing of Bax on its front cover) lists only a single symphony as being available (Del Mar’s No.6), together with five other orchestral works, a fanfare, five chamber works (mostly short pieces), six piano works, one choral piece (the feeble What is it like to be young and fair?), and a single song ― a far cry indeed from the present day when we have multiple recordings of a wide range of works to choose from. With these two splendid performances now available on CD, the only Lyrita recordings of Bax still to be reissued are Iris Loveridge’s marvellous interpretations of the piano music (including, I trust, the selection that she recorded for a fourth LP in the 1960s that was never issued) and Florence Hooton’s rather more variable survey of the works for cello and piano (with pianist Wilfrid Parry).