Reviewed by Christopher Webber
(with a note by Graham Parlett) 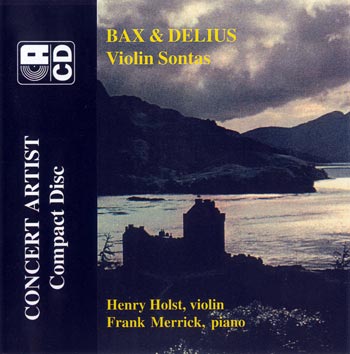 Holst and Merrick’s pioneering recordings of Bax’s three published Violin Sonatas, plus the Legend and Ballad, appeared briefly in the 1960’s. Only No.1, originally released with this Delius coupling on Concert Artist mono LP, had relatively widespread distribution. The other four works surfaced briefly on two Frank Merrick Society limited editions which are amongst the rarest of Bax LPs. No.1 was later reissued on Revolution stereo LP, the version much more often spotted nowadays in second-hand shops or on Ebay.

Concert Artist presumably did not have access to the stereo tapes, which is a pity. This disc—mono, but with a slight left channel bias—sounds congested and flat after the Revolution LP. There, piano to the left and violin to right made for a spacious, well-balanced sound. Here, Merrick’s forthright enthusiasm on occasion swamps his partner’s small but by no means thin tone. Holst’s style, laden with subtle portamenti, putting poetry of line before infallibility of tuning, adds to the old-fashioned charm of this issue, which is perhaps best considered as a historical rarity rather than a direct competitor with more modern recordings.

In one respect the performance is unique. Holst and Merrick remain the only duo to choose to record Bax’s sonata in its 1920 form, rather than the slightly cut 1945 revision [see Graham Parlett’s detailed listing below.] Does this make much odds? There’s no mention of the distinction on the box, or in Peter J. Pirie’s admirably detailed program note. Bax’s Violin Sonata No.1 is in either case one of his most powerfully sustained chamber works, which like the near-contemporary Viola Sonata flanks a stormy central Scherzo with two expansive, lyrical movements blossoming from a memorable motto theme. Agreed, the small cut the composer made in the third movement tightened the logic of what is essentially a meditative recapitulation, but we might well regret the excision of a haunting, minute-long episode in the first (track 1, from 7’17”) which has the violin floating dreamily over a slow, sinister, five-note piano ostinato.

Given this, and abounding poetic insights in the outer movements, it’s easy to overlook the technical shortcomings which diminish the ferocity of Bax’s Scherzo, and the disc’s very short playing time. Holst’s plangent tone haunts the memory long after the long-held pianissimo of the coda has faded, and the duo’s taut structuring still commands admiration forty years on. Their account of Delius’s aphoristic 2nd Sonata doesn’t capture the rapt poetry of Ralph Holmes’s version (with Eric Fenby) on Unicorn—again, the constricted mono sound is a drawback—but in the absence of a transfer from those elusive stereo tapes this well-documented release merits a positive welcome, not least for its unique Baxian credentials.

Graham Parlett writes:
In the revision of 1945, Bax made a cut in both the first and third movements:


3rd movement: 19 bars were omitted, from the second bar of p.46 to the eighth bar of p.47. In the 1945 edition, this passage would have occurred between the eleventh and twelfth bars of p.44.


No cuts were made in the second movement, but Bax adjusted and corrected expression marks throughout the score and added metronome markings at several places.