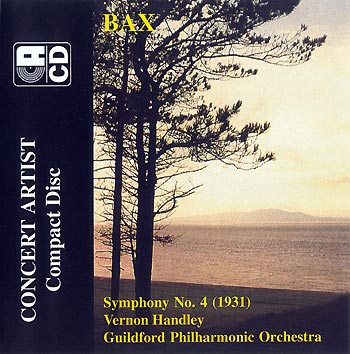 Despite its popularity during the composer’s lifetime, Bax’s Symphony No.4 is critically least prized of his seven. Its mercurial, often extrovert moods, sun-streaked ebullience and triumphal close may lie at the root of both criticism and quondam popular success. Even Vernon Handley has been guarded: “We all say that this is the weakest of the seven symphonies; but one must allow that in every symphonic canon a fine symphonic composer has the right to be a bit bluff and happy now and then.” ¹Given such pallid praise from Bax’s greatest champion, it’s ironic that thus far the 4th is the only one of the seven which Handley has had the chance to record twice.


By 1964 the young maestro had raised up the Guildford Philharmonic Orchestra—composed at that time partly of local amateurs with heavy professional stiffening—to the point where it was able to face the technical challenge of Bax’s symphonies. The fledgling Concert Artist company took the opportunity to set down their interpretation of the 4th. This was an important recording, only the second of any Bax symphony, and the first in stereo. The LP was later reissued by Revolution, and Concert Artist/Fidelio themselves produced a high quality tape cassette version, in infinitely superior sound. Now the renascent company has restored Handley’s first version to the catalogue, and very exciting it proves, coupled with a sturdy performance of Moeran’s Serenade.


To anyone only familiar with the old LP, the CD’s full dynamic range and open sound will come as a revelation. The prescribed organ underscoring the climaxes of the 1st and 3rd movements remains inaudible, but otherwise Concert Artist’s oil-painting ambience compares well against others of its time. The performance sounds literally twice as good as it did. It’s now possible to hear that some negative comment about the orchestra arose from the constrained, acid quality of that LP sound rather than the playing itself. The woodwind sound woody, the brass brassy, all of which adds to the performance’s comfortably period character; and if the strings occasionally sound … well, stringy, Handley as so often inspired his forces to play above themselves. There are one or two moments where choice seems dictated by the capabilities of this or that individual buy soma medicine player, but on the whole remarkably few allowances have to made if we’re to measure his 1964 achievement in Guildford against the 2002 Manchester remake.


Handley’s relative fleetness of foot in recent Bax performances is evident from the timings. In 1964 he took 5% longer over the main meat of the first movement. This is more down to sparing use of rubato than basic difference in tempo, but the feeling is different: Guildford’s authentically bluff, hearty bonhomie is set against Manchester ‘s compelling musical through-line and subtlety of detail. The slow movement was marginally quicker in 1964—surprisingly, as some laboured articulation and solo playing detract from the wonder of Bax’s twilit rockpool-world. Bax’s magical writing for glockenspiel and celeste is heavily spotlit, but this—unlike the sudden sonic cut-off at the end of the movement—is a matter of recording taste.


With the last movement—nearly 10% slower in 1964—there’s an appreciable difference, and one that tells in Guildford ‘s favour. The opening, with its trilling trumpets and sunburst confidence, benefits from the heavy-armour tread, whilst the later miniature Celtic jig-march for flute and harp sounds less quaintly characterful, more homogenised in the sleeker Manchester performance. Of the triumphal ending itself Handley has said: “If one does that sort of thing—and Bax does it thoroughly—that is, choose against subtlety, then one will have chosen to do so for a reason.”¹There’s plenty of reason revealed by both his performances, and the organ’s added bass sonorities in Manchester are breathtaking. The triumphant homecoming, though, is more movingly conveyed by the Guildford players at their slower tempo.


My head tells me that the new, Chandos version has to be the Handley 4th of choice. The more natural recording has greater dynamic range, the playing is more consistently excellent, Handley’s interpretation is if anything deeper and certainly more refined. However, this Guildford record has special qualities which aren’t lightly dismissed. It has solid good humour, many loving touches in phrasing, a distinctively strong colour and character; and in allowing Bax’s “choice against subtlety” in the last movement freer reign, the young 1964 Handley maybe came closer to the heart of what is surely Bax’s most spirited symphonic spectacular, warts and all. It’s good to be able to hear it at last in a transfer which does the young conductor and his brave band better justice.

[¹ From Vernon Handley’s interview with Lewis Foreman, in the notes to the complete Chandos set.]