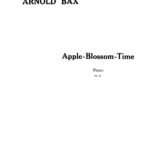 The Monthly Musical Record (September 1915, p.259f) critic reviewing the score of Apple-Blossom Time, suggests that ‘The art of Mr Bax is a correlative of the characteristic canvas work of Mr E.W. Hornel’. This is an interesting comparison. Edward Atkinson Hornel (1864–1933) was an Australian-born artist who moved to Kirkcudbright in Scotland. He specialised in Celtic and Japanese imagery – and pictures of orchards. The reviewer continues by noting that ‘summer happiness, trees in full blossom, happy carefree childhood, rich luxurious natural setting, all appear in the music of Bax as clearly as they are seen in the pictures of Hornel.’ As to the musical content of Apple-Blossom Time, it is noted that ‘The textures, the vivid lines, the almost kaleidoscopic colouring clearly defined yet all blended in a subtle way by exquisite mastery of mood’ also suggests the work of Hornel.

In the spring 1914 Bax had returned after some years living in Ireland. Three years previously, Bax and his wife had moved to Rathgar, near Dublin (Parlett, 1999). It was very much the fulfilment of a dream. During the First World War, Bax was a non-combatant, due to a lifelong heart condition. Apple-Blossom Time was completed in May 1915 when Bax was staying in Marlow, Buckinghamshire. In 1914, Bax had begun a passionate affair with the pianist Harriet Cohen which was to lead to the breakup of his marriage in 1918.

Arnold Bax composed six piano works during 1915: The Princess’s Rose Garden (Nocturne), In a Vodka Shop and The Maiden with the Daffodil in January, Apple-Blossom Time and Sleepy Head in May and finally A Mountain Mood and Winter Waters in September. He also issued the second version of his Sonata No.1 for violin and piano, completed his Quintet in G minor for piano and strings, the Legend for violin and piano, and Nympholept for orchestra. During this year he was working on a projected (but largely unwritten) opera, Red Owen. In addition, Bax began the preliminary version of his Second Violin Sonata. (Parlett, 1999).

Apple-Blossom Time was dedicated to the composer/artist S.H. Braithwaite. It is useful to present a few facts about this little-known artist. He was born Sam Hartley Braithwaite on 20 July 1883 at Egremont in Cumberland. He went up to the Royal Academy of Music where he majored on performance and composition. His first interest was the piano, although he also studied the organ and the clarinet. Braithwaite later became a professor at the R.A.M. Philip Scowcroft (MusicWeb International) states that Braithwaite composed several works for the piano, including an English Dance and a Suite of Ancient Dances. Apparently, most of his works were for orchestra and included an overture The Fighting Temeraire, an Idyll, an Oriental Fragment, a tantalising Snow Picture, A Night by Dalegarth Bridge and – perhaps with an echo of Albert Ketèlbey – Near an Eastern Bazaar. Braithwaite had begun his career as a composer but eventually decided to concentrate on painting and etching. He lived most of his life in Bournemouth until his death on 13 January 1947.

Bax’s piano music often exploits a significant practical knowledge of the piano along with his distinctly romantic personality and vivid imagination. A variety of musical and literary influences lie behind his pianistic style including an early visit to Russia and a deep understanding of Irish literature and Celtic folk music. In addition, there are several passages throughout the piano works that could be described as ‘impressionistic.’

The formal structure of Apple-Blossom Time is as straightforward as one of ‘Haydn’s minuets’, yet the chromatic harmonic language is typical of Bax’s writing at this period. The key signature is ostensibly G major, but this tonality is never established for long. The piece opens enigmatically, with ‘a glimpse of graceful, delicate apple blossoms as seen in their spring glory’ (Posey, 2000, p.57): –

This opening statement is marked to be played ‘fresh and rhythmical.’ The progress of this section becomes more introspective, with the music coming to a virtual standstill. The ‘trio’ is written in 7/4 time and, although it is meant to be played ambien 10mg buy ‘gay and playful’, it too is reflective and reminiscent of the loss of innocence: –

The opening section is repeated, this time signed ‘Exuberant’: –

Once again it calms down to virtual silence, before the first two bars of the middle section are reprised, followed by a long-breathed ‘pp’ chord (Eb7#5) supporting a ‘very light and delicate’ descending phrase: –

The short coda has been noticed by commentators. This is seen as a typically Celtic ‘musical trait’ – the sudden mood change, from ‘Exuberant’ to ‘Slow and Sad.’ (Posey, 2000, p.59). Note the open parallel fifths in the upper stave. In the first bar below, the right hand plays the opening motive (Eb-E) that has dominated the piece, a rising semitone: –

Harmonically, Bax utilises a large palette of 9th, 11th, and 13th chords without preparation. This makes ‘the harmonic progressions more colourful and even piquant’ (Ryu 2019, p.15). Considerable use is made of spread chords, pedal notes and complex chromatic writing.
The piece lasts just under 3½ minutes. Apple-Blossom Time was published by Augener in 1915.

Little academic interest has been shown in Bax’s Apple-Blossom Time. The two major exceptions are the theses by Brenda Posey (2000) and Bora Ryu (2019). The biographies of Arnold Bax by Foreman (1983/2007) and Scott-Sutherland (1973) barely mention the work. Apart from bibliographical details, Foreman (p.213) make a single mention, and that is a citation from Eric Blom’s introduction to the all-Bax Concert held at the Queen’s Hall, London on 13 November 1922. Scott-Sutherland (op.cit. p.105) suggests that Apple-Tree Blossom is a ‘freshly aerial nature impression.’ Christopher Palmer described Apple-Blossom Time as ‘now light and delicate, now exuberant, the piece has a happy open-air feeling.’ (Palmer, 1990).

the most difficult of his works to interpret. The opening ‘Allegretto’ is marked ‘fresh and rhythmical’ and has a mazurka-like lilt (though without the slightest atmosphere of the ballroom – its suggestions are all of the fresh air). The ‘gay and playful’ portion which follows has a tripping (7/4) measure, and when the first theme returns, ‘exuberant,’ it showers light notes from itself. Then it gradually becomes ‘more serious,’ and at last, with falling petals, drifts ‘slow and sad’ into extinction.’

The first performance of Apple-Blossom Time was given by the now-forgotten pianist Phyllis Emanuel at the Steinway Hall on 18 November 1915 during a War Emergency Entertainments All-British Concert. This recital was reviewed in the Daily Telegraph (19 November 1915, p.5). Alas, precious little is said here about Bax’s piano piece, save that there were ‘some pianoforte solos, including, a little piece, Apple-Blossom Time in the impressionistic manner by Arnold Bax…’

Ryu, Bora, A Comparative Study of Frank Bridge’s Character Pieces for Piano from the 1910s and 1920s and Character Pieces by his Contemporaries, Arnold Bax, Cyril Scott, and John Ireland. University of Illinois 2019