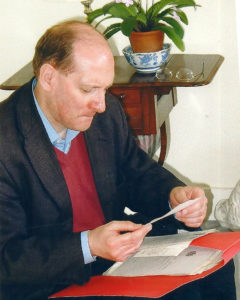 When in 1996 I created the Sir Arnold Bax Website, I knew immediately the first couple of luminaries I wanted to interview.  Vernon (Tod) Handley was my initial preference, but the media-shy conductor turned out to be very evasive; so I pursued my second choice, who was at that time was the curator of Asian Art at the Victoria and Albert Museum in London, and who during his off hours was intensively involved in research on the life and music of Sir Arnold Bax.

I had become familiar with Graham Parlett’s name in the mid-1980s after purchasing Bax’s score for David Lean’s Oliver Twist, on a Cloud 9 LP that contained his wonderfully insightful liner notes.  I also learned that he had edited and reconstructed much of the score so here was a scholar, I thought, seriously dedicated to Bax’s music and whose name I would continue to watch for.

It didn’t take long for that name to pop up again, this time on an Ulster Orchestra Chandos disc featuring music by Britten, Bridge and introducing an unknown tone-poem by Bax titled On the Sea-Shore. The liner notes stated that this short but potent work was intended as the opening to an act of Bax’s unfinished opera Deirdre and that Graham had orchestrated the piano sketches to create a new tone-poem.  I remember my first hearing of the work and recall being blown away by the orchestration, which sounded wholly authentic.  I also remember thinking there was no way Bax could have improved upon it. Parlett’s skills as an orchestrator were again confirmed when his arrangement of May Night in the Ukraine was recorded by Bryden Thomson and the LPO for Chandos a few years later.  This well-known piano piece had been intended as the central movement to an orchestral score called “The Russian Suite” but Bax never orchestrated the piece; so Graham did the work for him, allowing the “Russian Suite” to be recorded complete. 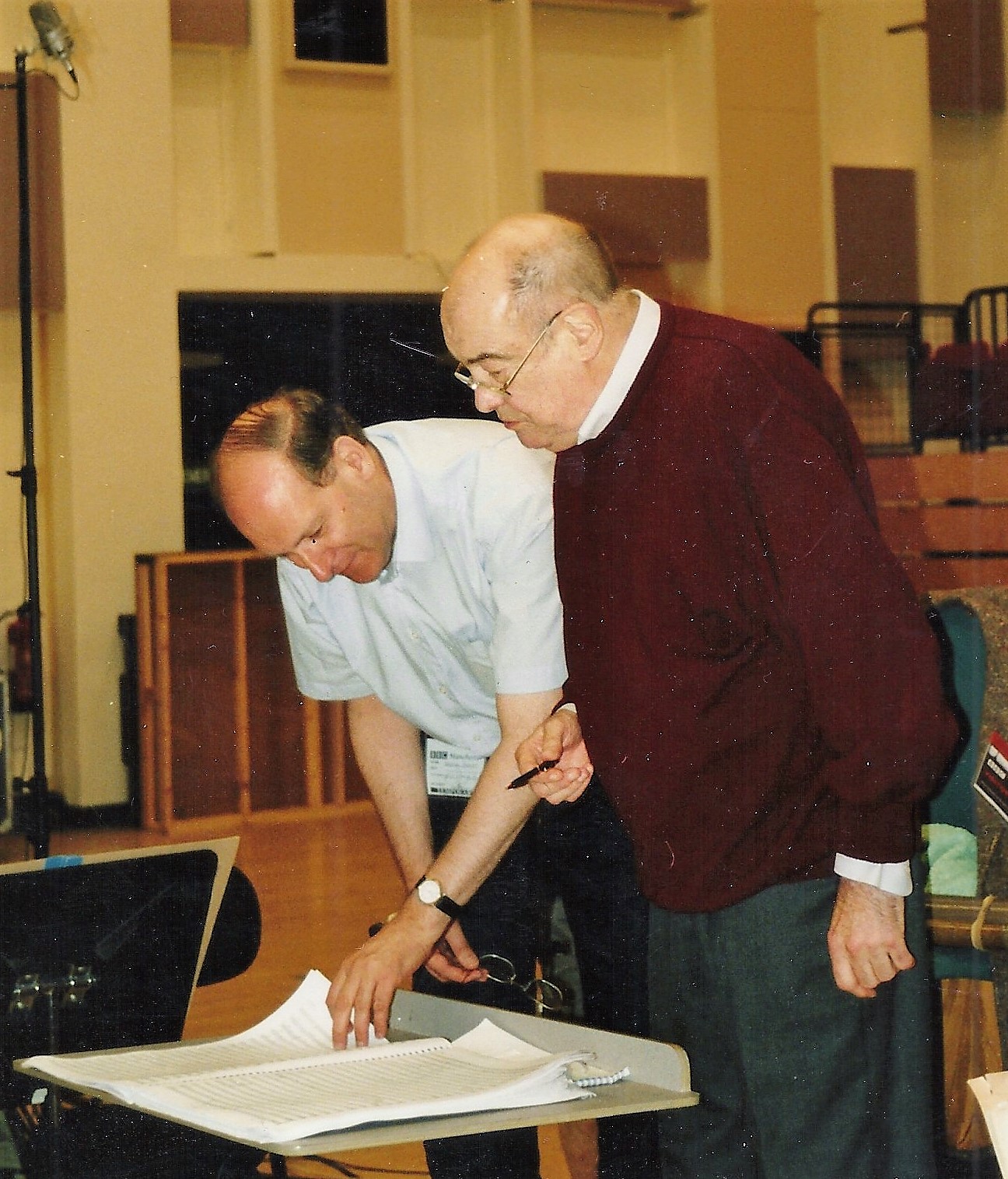 My curiosity obviously piqued, I located Graham’s e-mail address and arranged a luncheon with him at the Victoria and Albert Museum cafeteria.  I brought my mini-tape recorder along with a list of questions and immediately became aware that Graham was uncomfortable talking about himself.   He was warm, humorous and as often as possible he would deflect any question away I suspect he considered to be too personal.  He did tell me that he had been introduced to Bax by his older brother David who played records of The Garden of Fand and Third Symphony to him and that’s how he became hooked. He also told me that he was compiling information for a Catalogue of Bax’s music for Oxford University Press that he hoped would be issued in 1999.  It was issued and it remains the definitive volume on Bax’s music, an essential resource for anyone remotely interested in the composer.

We had a wonderful lunch and I left our first meeting feeling enthused and enlightened.  I was confident this interview was going to be excellent but not more than a week after our luncheon, I received a note from Graham asking me not to publish it.  I remember his reason was that he didn’t think anything he had said would be of interest other than to the most rabid Arnold Bax admirers.  I tried to convince him otherwise but he was adamant and our interview never saw the light of day.  What I did get in its place, however, was a decades-long friendship with someone I came to consider my spiritual advisor in all things Baxian. He threw his full support behind the new website, allowing me to reprint many of his old essays and articles from the long defunct Bax Society while offering to review any new CDs and books that were of interest to him.  We were in constant contact in those days and when I moved to England in 1998 I began to see him regularly, buy ambien cr online often in the company of our great mutual friend and co-contributor to the Bax site, Christopher Webber.  Chris and Graham were natural cohorts as they both possess encyclopedic minds with interests that extend well beyond Bax and music.  There were other friends too who often joined our gatherings including the British Music Society’s chief editor Rob Barnett, Bax’s first biographer Colin Scott-Sutherland, the distinguished MP Peter Ainsworth, the young pianist Christopher Atkinson and most frequently of all, Graham’s beloved and also very distinguished brother David.   This was an exciting time to be involved with Bax as so many recordings were being issued and concert performances were occurring as well.

The most important event of that period was Vernon Handley’s return to the studio to record a complete set of Bax symphonies for Chandos; and it was thanks to Graham that I got to interview Tod, as I believe he convinced the conductor of my Baxian allegiances. After those initial meetings with Tod I was invited to attend several of his recording sessions with the BBC Philharmonic in Manchester – always with Graham along for company, as he was there at Handley’s request to assist the producer and answer any questions that might arise about a misplaced note or a faulty part in the score.  Tod knew Graham could sort out these problems quickly and I sensed that Tod appreciated Graham’s calm and reassuring manner as well as his way of lightening the mood with his humor.

These are just a few of the wonderful memories I have of Graham. I never imagined there could come a time when he wouldn’t be available to swap an e-mail or have a chat online, or a visit in person or at a concert. The reason for this is because he never seemed to age.  He always looked at least 30 years younger than his actual age and a lot of this, I’m sure, was due to his love of exercise, walking and travel.  He also had a limitless supply of energy that allowed him to work on multiple projects such as orchestrating and editing works by John Ireland, Vaughan Williams and Bax while continuing his never-ending search for new data to add to his Bax catalogue.  It’s for this reason that his illness this year and death on Sunday May 30th came as such a horrible shock to his family and many friends. 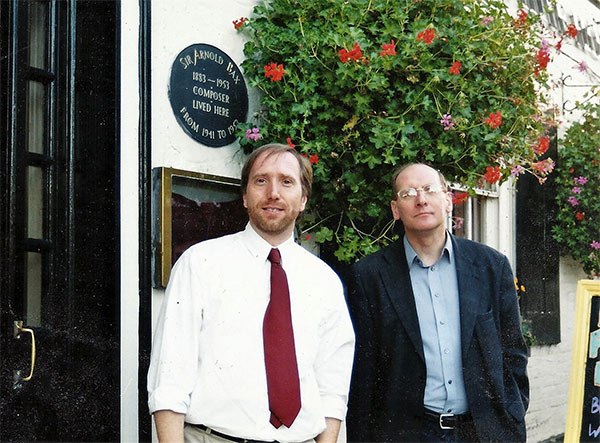 It’s an understatement to say that Graham’s death leaves a massive void in the lives of all who knew him well.  He was that irreplaceable friend whose company you enjoyed because his enthusiasm, knowledge and insight into those loves you shared always enhanced your own.   But more importantly, the world has lost one of its great music scholars.  So much that we have learned and come to understand about Bax in the last 30 years is due to Graham’s tireless research.   It’s because of Graham’s work that many of the old prejudices and assumptions against Bax have been refuted and/or disappeared from popular opinion.

Graham’s knowledge of music was limitless but it was Bax who held a special fascination for him – perhaps because he identified so closely with that odd dichotomy in Bax of the reserved and studious composer who just below the surface was teeming with passions that were forever driving him to explore all the joys and pleasures that life offers.  The same was true of Graham.  He loved music, art, literature, movies, food, travel, friendship and so much else besides and he led life to the very fullest.   His legacy is massive as he leaves us with volumes of material and scores that scholars and musicians will be reviewing for many years to come.  In this way, Graham will live on.

Note:  I would like to thank Christopher Webber for his invaluable assistance in editing this tribute.