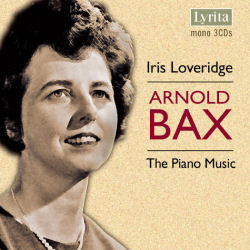 Recorded between 1959 and 1963 in The Music Room, Burnham, Buckinghamshire, UK

What is remarkable about these pioneering recordings is that despite the primitive sound, these recordings of Bax’s piano music have never been surpassed as a set and remain the best example for how this music, particularly the sonatas, should be played.

The earliest of these recordings are now 50 years old and sounding every day of it but when Richard Itter began producing his own recordings in 1959, he was using high quality amateur mono equipment set up in his own home where the artists were invited to come and make their records.  He started out modestly by making piano and chamber LPs and then in the mid 1960s, he expanded his operations when he made a contract with Decca to engineer his discs in state-of-the-art sound and the focus of his label then became orchestral British music.  But when these recordings were made, the operations were more intimate but even at this early stage in Lyrita’s history, it’s clear Mr. Itter was determined to involve the very finest artists possible and that’s why these early mono recordings have been cherished for so many years.  I’m glad to report that the remasterings by Simon Gibson are excellent and I suspect after a couple of minutes of playing, most listeners will adjust to the hollow piano sound and become enthralled by interpretations themselves, which are so fresh and dynamic.

Iris Loveridge is one of the great unsung heroes of British music.  It’s really a shame that she didn’t continue making records for Lyrita as she obviously had an understanding of and sympathy for the British piano repertoire that few other pianists have since been able to match. Certainly none of the pianists who have recorded Bax’s music have combined her steely resolve and directness with her ability to project the music’s more elusive and quieter moods.  A surprising number of pianists have recorded the sonatas but few very successfully.  Eric Parkin’s playing for Chandos is much too staid and generalized whereas Ashley Wass on Naxos takes liberties with tempos that the music frequently can’t sustain.  Mr. Wass has since developed into a first-rate Bax pianist but I get the sense he was still feeling his way around the music when he recorded the sonatas.  Malcolm Binns in his new set for the British Music Society has many fine moments and is obviously sensitive to Bax’s instructions but his playing lacks the virtuosity that this music demands. That is certainly true of Frank Merrick in his set from the early 1960s, which must be considered authoritative as he knew Bax well but was well past his prime as a player when in his 80s he recorded the sonatas.   Marie-Catherine Girod’s interpretations are wildly mannered and don’t hold up on repeated listening. The only pianist who seems to have learned anything from the Loveridge set while at the same time remaining completely individual is the great German pianist Michael Endres, whose set of sonatas on Oehms remains the definitive modern edition. His technique no doubt exceeds what Iris Loveridge was capable of but unfortunately, Endres has only recorded the sonatas, so in terms of the smaller works, Loveridge still reigns supreme and her set must be considered mandatory as a result.

Loveridge’s recordings of Bax’s four numbered piano sonatas were originally published one per LP with small piano pieces taking up the other side of the disc.   Loveridge recorded a fifth disc of just smaller pieces but it was never released on LP so this CD set is actually a debut and includes the only recording yet made of the short  Concert Valse in E flat. It’s amazing we’ve had to wait nearly 50 years for its release.

For this set, Lyrita has arranged the music over three discs in chronological order and so we start with the First Sonata in its revised edition. Loveridge remains my preferred version of this sonata even taking into account Michael Endres’s barn-storming account. Of all the Bax sonatas, this work needs to be played with tremendous strength and concentration so that the tension never lags and Endres does this brilliantly.  Loveridge can’t equal his strength but she is as focused and she allows more for moments of relaxation permitting the music to breath and she certainly indulges in more rubato in the slower sections. Loveridge can’t match Michael’s virtuosity in the glorious bell-ringing coda but she plays it very well and succeeds in making all the chords sound as clear and accurate as possible.  In my opinion, the First Sonata still awaits a truly great recording but I still go back to the Loveridge when I want to hear what is for me the most musically satisfying performance of this great work.

My introduction to the Second Sonata was through the Loveridge LP and I remain very partial to it.  Her playing here is especially secure and I suspect that’s because she played this sonata more frequently than the others. What I love about the Loveridge performance is that it all seems so perfectly balanced. Nothing about her playing is exaggerated nor does she cheat the drama of what is after all a very conflicted piece of music.  Wass’s Naxos recording is beautifully played and his is certainly the most epic performance. I’m actually very fond of it and wouldn’t be without it but I know others find his recording of the Second too measured.  Endres keeps everything moving and is a model of objectivity but his performance fails to involve me in the drama as much as I’d like. Loveridge gets it all right and is undoubtedly the safest choice for those who find Wass too intense or Endres too straight.

The Third Sonata is the most elusive of the four but at the same time it seems to be the favorite of most of the Bax pianists I’ve spoken with including Wass and Endres.   I don’t know what Loveridge’s attitude was toward it but judging from the recording, she understood it very well and gives a very captivating performances of this very difficult music.  Here I have to say Michael Endres is unsurpassed as an interpretation and the modern recording really helps with music that relies so much on shading and mood but Loveridge runs him a close second and the performances are actually quite similar.

The same comparison can be made regarding the Fourth Sonata, which both Endres and Loveridge play with tremendous energy. Endres again is to be preferred because he also plays with greater delicacy in the beautiful middle movement.  Here, the Loveridge performance is robbed of its mystery because of the very dry recorded acoustic but she’s thrilling in the outer movements both of which she takes at faster speeds. All other recorded performances of this sonata disappoint me due to sluggish tempos in the outer movements.

Endres gives us the definitive recording of the Bax Symphony-Sonata as the filler for his sonatas set whereas Loveridge gives us a near-complete edition of Bax’s smaller piano works.  Loveridge did not record the Symphony-Sonata but she is the only pianist to have recorded the Valse in E Flat, a relatively minor work that has never attracted others pianist to play it.  Needless to say, Loveridge plays it very well.

Here I have to admit a slight reservation about Loveridge’s playing in this set.   The same directness and refusal to linger that works so well in the sonatas doesn’t always serve the more picturesque and gentle piano pieces, which in her hands come off as just a little to matter of fact. Some real gems like “Lullaby”, “May Night in the Ukraine”, “Nereid” and “Sleepy Head” need a softer touch than Loveridge allows but again the dry acoustic works against her.  On the other hand, her performances of the more muscular piano pieces like “Paean”, “Gopak”, “In a Vodka Shop”, “Whirligig”, “Ceremonial Dance” and “Toccata” have never been better done.

Praise must also be given for Loveridge’s performances of the larger piano pieces such as “Dream in Exile” and “What the Minstrel Told Us”.  These are mini tone poems with both slow and fast sections and Loveridge sees to it that the contrasts in tempo and dynamics are fully observed.  Eric Parkin is also very good in these pieces although again I prefer the slightly starker and less sentimental approach of Loveridge.

The return of these classic recordings is real cause for celebration as I suspected they’d never see the light of day again. Lyrita is to be praised for their magnificent presentation including re-printing all of Peter J. Pirie’s original liner notes with additional comments by Lewis Foreman.  Pirie was one of the most thoughtful and controversial musicologists of his day who promoted Bax when to do so was extremely unfashionable.  His commentary on Bax’s piano music remains, along with the writings of the late Christopher Palmer, the most insightful we’ve yet had on the subject.

In closing, this set is a mandatory purchase for anyone remotely interested in Bax’s piano music and I hope future pianists who are adventurous enough to attempt this repertoire will at first give Loveridge a listen to hear how one extremely gifted pianist was able to survey this amazing and difficult music with such convincing results.