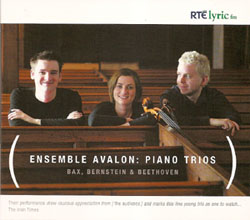 CD available for purchase at the Ensemble Avalon Website

I received this disc shortly after I heard of the passing of Vernon Handley and I have to say these spirited and wonderfully sympathetic performances of Bax, Bernstein and Beethoven lifted my mood because they reminded me that there is a new generation of really gifted musicians who are discovering Bax’s music and have a real desire to promote it as best they can. It’s interesting that while Bax’s orchestral music remains under-performed, Bax’s chamber music has become popular and is being performed throughout Europe, American and Great Britain.  There’s no doubt that Bax’s Clarinet Sonata, Elegiac Trio and Oboe Quintet have become his most widely performed and recorded works and are becoming better known internationally than Tintagel.  Hopefully there will emerge new conductors willing to promote Bax’s orchestral music with the same passion and understanding that Tod once did but for now we can be grateful that so many chamber musicians have taken Bax to their hearts.

This new disc is from Ensemble Avalon and they have chosen a program of Bax, Bernstein and Beethoven for their debut recording.  All three players in the Ensemble are Irish (from both Northern Ireland and the Republic of Ireland) and it’s particularly gratifying to see young Irish players promoting Bax so enthusiastically.  The combination of late Bax with early Bernstein along with one of the acknowledged masterworks of the Piano Trio repertoire makes for a terrifically entertaining and diverse program that really shows off what these brilliant young players are capable of.

The Bax Trio comes from near the very end of his composing career (1946) and there’s no denying that there is little in it that could be called innovative yet there is a freshness and concentration to the music that indicates Bax wasn’t just going through the motions of writing more music down on paper.  He seems to have been really engaged by the music and in a performance as electric and passionately played as this, the music shows Bax was still capable of writing first-rate music in his later years despite his having “retired like a grocer” – as he liked to say.

Like almost all of Bax’s chamber music, the Piano Trio has not suffered for lack of good recordings.   Those readings by the Borodin Trio on Chandos, the Pirasti Trio on ASV and the Gould Piano Trio on Naxos are all recommendable with perhaps the Gould Trio getting the slight edge for the warmth and beauty of their playing.   But this newcomer goes to the top of my list for the extraordinary excitement they generate in their playing and the impression they give of really having fun with the music.  All three players are superb and they blend beautifully in what is a rather up-front but still pleasing recording.  It also sounds as though they had played the work many times before taking it to the recording studio as the tricky tempo shifts so often found in Bax are manoeuvred with smooth precision.  I hope these players will continue to explore Bax’s music, both as a trio and individually.  They have scheduled a festival in Wexford, Ireland in November featuring the music of Bax and Beethoven so their commitment to Sir Arnold seems pretty strong.   (See the Forthcoming Concerts and This Months’ Feature pages for more information).

The Bernstein and Beethoven Trios are played with the same youthful intensity that makes the Bax so exciting.   The Bernstein Trio was composed when he was only 19-years old and according to pianist Michael McHale, he wrote it for three female musicians who lived in his same building at the time he was attending Harvard.  It was given a performance — presumably by the three housemates who inspired it – but it was never published in Bernstein’s lifetime and according to the liner notes, only became available for performance in 1990.   The Trio is in three short movements and it opens with a lament for cello and violin that reminded me a little of Alban Berg.  There are other influences in this work including Ravel in some of the piano writing and a whole host of Russians including Stravinsky and Prokofiev.   However, Bernstein’s own musical personality shines through, most notably in the last movement with its klezmer-like rhythms and a theme that is unmistakably his.   It’s a wonderful discovery and I can’t imagine it better played than here.

The Beethoven Ghost Trio from 1808 has been recorded many times and admittedly, this performance lacks some of the richness and weight to be found in the classic Philips recording by the Beaux Arts Trio (my comparison) but what they may lack in weight they make up for with playing of tremendous passion and precision that gives this very familiar work a freshness and vitality that serves it very well.

So, a welcome debut by three outstanding Irish musicians who have obviously taken Bax to their hearts.   I look forward to hearing more from Ensemble Avalon as their interest in unusual repertoire and the brilliance of their playing should lead to many more outstanding performances and recordings.  I believe we have much to look forward to from them.