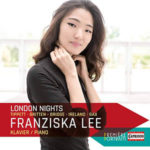 As the music here is often considered the preserve of British pianists, it is a special pleasure to welcome the Korean-born, German-based Franziska Lee to the territory. An acclaimed Schubert specialist, she brings Schubertian poetic sensibility to bear on this 20th century English repertoire, as well as the refined sense of colour and voicing which impressed reviewers of her debut disc ‘L’heure exquise’ (C3006), featuring music by Dutilleux and Poulenc. Although we might quibble with the title ‘London Nights’ (only Ireland’s posthumous nocturne has any reference to the city) and with Capriccio’s failure to include any liner notes beyond a brief biography of the pianist herself, there is no quibbling with the outstanding clarity of the recorded sound. Pianos from the Bayreuth-based firm of Steingraeber are famed for their brilliant articulation, and Lee’s light touch registers every note – no small achievement, given the fearsome complexity of the Bax and Tippett sonatas in particular.

To begin at the beginning, Lee’s reading of Tippett’s Sonata No.1, a coming-of-age work from 1936-7, revised in 1942 and dedicated to the memory of his close friend Francesca Allison, may miss the rhythmic vibrancy Steven Osborne or the meatier John Ogdon brought to its outer movements, but her understated tact in the slow movement (based on the Scottish folksong ‘Ca’ the yowes’) is more moving than either, and her unfussy brilliance in the scherzo avoids any hint of congestion in Tippett’s exuberant writing. The most refreshing aspect of this performance – as elsewhere on the disc – is Lee’s ability to quietly open the door on new horizons, in music we thought we knew perfectly well.

If Holiday Diary lacks something in sheer joie de vivre – touches of humour evident in Stephen Hough’s benchmark EMI Classics version, such as the diving splash in the first piece, ‘Early Morning Bathe’, are much less graphic here – Lee’s clean fingering and slightly relaxed tempi make us nicely aware of the spare economy of Britten’s sound world: ‘Night’ displays a Bergian chiaroscuro which works notably well. She is similarly on target in Bridge’s trio of Sketches, which can seem faintly-scented salon morceaux (the ‘Valse Capricieuse’ is oddly like one of Grieg’s more frenchified Lyric Pieces) but never do in Lee’s simple but never simplistic presentation.

John Lenehan (on Naxos) may bring richer romantic atmosphere to Ireland’s Ballade of London Nights, edited and completed by Alan Rowlands in the 1960s from the composer’s undated draft, but his pedalling perhaps evokes one of those old pea-souper fogs – at least compared against Lee, whose clarity in Ireland’s chromatic arpeggios reveals a surprising kinship with late Fauré. It’s a pristine performance of a memorable miniature.

So finally, to our onions. Or perhaps, given the 1st Sonata’s Russian roots, I should say our borscht. As we’d expect by now, Lee keeps Bax’s grand, romantic gestures on a tight rein, compared to traditionally impassioned interpreters such as Frank Merrick, let alone the headstrong Joyce Hatto. Lee’s account is to be cherished for precision and poetry rather than brooding, Lisztian bravura. Her precision recalls Michael Endres’s virtuosic account, though it lacks his impressively icy glitter. Her way with Bax’s quiet moments of poetry brings Marie-Catherine Girod’s Chopinesque delicacy to mind, though Lee evokes a tender melancholy of her own.

Listening to a major Bax piano work often involves a sense of wonder that anyone can make sense of his plethora of notes, so it’s perhaps a mark of increasing acceptance of this marvellous sonata that Lee makes everything sound – not easy, but inevitable. Although ‘simply following the score’ is never simple to achieve, that’s what she does. Effects are never overdone. Rubato and pedalling are never lazily over-employed. Bax’s structure unfolds naturally and without strain. There isn’t a note out of place, and every single note justifies its place. Anyone describing this music as ‘meandering’ simply isn’t listening properly, and Lee’s focused imagination provides a modern interpretation which deserves its place with the best.

Like all ten previous interpreters of the 1st Sonata on disc, Franziska Lee plays the revised and published 1920 version (GP240) rather than the 1910 original (GP127). So soon after his death, it is moving to see these numbers from Graham Parlett’s definitive catalogue of Bax’s works included in the CD’s track listings: I hope other players and publishers will follow Lee’s and Capriccio’s lead in paying tribute to Graham’s work, by including GP numbers – a practise which he himself over-modestly discouraged – in future issues of Bax’s music on disc.