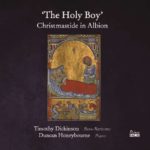 ‘The Holy Boy’ Christmastide in Albion

Gurney, I: Carol of the Skiddaw Yowes

Warlock, P: The bayly berith the bell away

Bax, A: Merrily to Bethlehem

Bax, A: Variations on a North Country Christmas Carol

Head, M: The Carol of the Field Mice

If you are looking for a perfect stocking-stuffer for your music-loving friend who also has a liking for British song and composers, then I’ve got the perfect suggestion for you.  Bass-Baritone Timothy Dickinson and pianist Duncan Honeybourne have combined their considerable talents to create a gorgeous disc of yuletide songs by British composers that features some well-known favorites alongside a few rarities including a selection of little-known carol arrangements by Arnold Bax.    The range and scope of this disc is impressive and admirers of British song will find much to enjoy here.

The disc takes its name from John Ireland’s famous piano miniature, “The Holy Boy,” which l confess I did not know was also a song.  And while I’m revealing my ignorance, I’ll also admit that most of these songs are new to me so it was a real pleasure to be introduced to them by the team of Dickinson and Honeybourne who are keenly sensitive to their darker nuances as well as to their exuberance and both artists produce a glorious sound – particularly Dickinson whose warm, clear tone is ideally suited for this music. Hearing him sing Vaughan Williams’s exquisite “The Oxen” makes me hope we’ll someday hear him perform in a complete performance of VW’s grossly under-appreciated cantata, “Hodie” from this song is taken.

Guests on this site are no doubt curious about the inclusion of three of Bax’s “Five Fantasies on Polish Christmas Carols,” which are arrangements of carols that Bax wrote in 1942 and dedicated ‘To the Children of Poland.’  The original arrangement is for unison trebles and string orchestra so here we are hearing a piano arrangement that Duncan Honeybourne manages with his usual sensitive and virtuosic skill.  According to Graham Parlett’s superb Catalogue on Bax’s music, the composer was less than enthusiastic about arranging these carols but then that was pretty much true of everything he wrote after the Seventh Symphony of 1939.  His lack of enthusiasm is not discernable from the carols themselves as they are beautiful and it’s great that we now have these three in such sympathetic performances.  Hopefully the original version of all five songs will be made available someday in a commercial recording.   As a bonus for Bax fans, this disc also provides Duncan’s delightful performance of another late Bax work, the not-so-miniature piano solo, “O Dame get up and bake your pies.”

There is much to discover here and I believe this could become a seasonal favorite disc as well as a reference for those with any interest in the Christmas music of the composers represented here.  It’s astonishing to me that so many major British composers from the past century gifted us with so much great yuletide music and here, on this disc, we have among the very best and all beautifully performed.