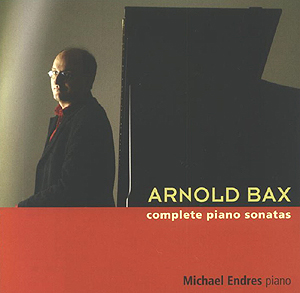 If Bax the symphonist causes scarcely a blip on the international radar, the same can’t be said of Bax the chamber and instrumental composer. Excellent discs of his smaller-scale output have recently appeared on Canadian, American, Italian and French labels, so it is especially good to welcome leading German independent Oehms Classics into the fold. It’s always important for a composer to interest performers outside his own country; but when a musician as eminent as leading German pianist Michael Endres decides to record the Piano Sonatas, we seem to have reached a Baxian watershed comparable to that moment when Bernard Haitink took up his baton to record the complete Vaughan Williams symphonies.

A watershed in another way, too. Although this is the sixth complete set of the numbered sonatas to be recorded, it’s the first to include the 1921 Sonata in E-flat major which Bax recast orchestrally (with a new slow movement) as his First Symphony. The piano original is a mightily complex and original 3-movement structure, weighing in at 32 minutes; and Endres – in an advance on John McCabe’s pioneer reading on Continuum – leaves us in no doubt that this restless epic is fully worthy of a place alongside its more familiar, equally formidable siblings.

His poise and lucid articulation are unfailing on, as Robert Hull put it, “an instrument stubborn to reproduce convincingly a harmony not only unusually elaborate but often exceedingly rapid in its integral changes”. That the pianist achieves this so consistently without losing sight of the wood for the technical trees is hugely impressive. In his booklet interview with Richard Adams, Endres pays tribute to Vernon Handley’s “amazing” ability to bring out the structural strength of Bax’s music by tight pacing, and he puts his money where his mouth is – no indulgent lingering here, for sure. He does exactly what’s marked in the score, no more, no less.

This attractive, easy decisiveness stems no doubt from the experience of having played the works regularly in public. Endres’ pianistic armoury is masterfully deployed, whether in matters of dynamic gradation, rhythmic precision or elasticity of rubato, which is never overdone. When he brings out the big guns at the clangourous climax of the 1st Sonata the impact is overwhelming, but he can impress just as deeply in the reflective, brooding lagoons of the 2nd. Throughout both works tempi and transitions are unarguably judged; and if Endres’ iron-grip personality refuses to indulge Bax’s invitations to Lisztian bravura, the compensation for moments of brusqueness lies in a bar-by-bar vitality which holds the listener in thrall.

About the last two sonatas there can be no doubts whatsoever. No other recording has captured so fully the mercurial mood changes and emotional variety of the 3rd, which make it the hardest sonata to bring off. Endres uncovers a cornucopia of pianistic colour and musical substance which reveal it to be the most rewarding of the lot – this is an astonishingly good performance! Nor does he sell the simpler, more relaxed appeal of the4th Sonata short, revelling in its comparatively chaste lines and bringing out hints of neo-classical serenity and unexpected flashes of jazz-cool wit.

In such multi-planar music no single interpretation could ever be considered “definitive”, but Endres’ musicianship throughout the cycle is consummately absorbing. All five performances grow and deepen on acquaintance. His work is enhanced by a near-perfect recording, engineered by Walburga Dahmen in WDR’s Cologne Bismarck-Saal, bright and clean in the treble but full-throated in the lower reaches, effortlessly capturing Endres’ tonal nuances without dynamic compromise. Nor do Oehms’ unhackneyed photos of the composer, lively interview or booklet design let the side down. Michael Endres has raised the bar for Bax pianists the world over.