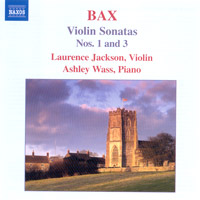 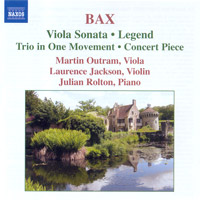 Viola and Piano music, Trio in One Movement

The Naxos Bax chamber catalogue grows in stature. No surprise that the two most recent entries centre on members of the Maggini Quartet, whose outstanding set of the String Quartets was such a winning highlight amongst 2003 releases. No surprise, either, that both new discs prove to be winners in their own right. The violin sonatas CD in particular is a fabulous piece of music making.

The Magginis’ leader Laurence Jackson is joined by Ashley Wass in the first of two volumes covering Bax’s violin-piano music, with beautiful results. In the 1st SonataJackson’s singing tone, technical assurance and dynamic control help him find the blend of highly integrated passion and serenity the work needs. Wass is audibly sparked to give of his best, too. Tempi and rubato are most beautifully judged throughout by both artists, and there’s a real sense of spontaneity and rhapsodic flow which never compromise the structural integrity of this masterwork.

Like all their predecessors on disc – apart from Henry Holst and Frank Merrick on Concert Artist, who play Bax’s 1920 score distilled from earlier versions made during the previous decade – Jackson and Wass prefer the slightly cut, 1945 revision. As an encore they give us the previously unrecorded second and third movements from 1910, which turn out to be of more than academic interest. Bax was surely right to feel that the original “slow and sombre” middle movement did not fit its context. Wide-ranging in mood and tone, with a witty, almost Dvorakian counter-subject, it turns out to be a most attractive piece on its own terms. The 1910 Allegro molto vivace finale utilises a sprightly Irish jig-like theme, cycling rather clumsily back to the sonata’s opening motif halfway through – Bax reused some of this material for the 1920 recasting – before regressing into an extended meditation on the Irish theme, which finally combines with the 1st movement motif in a grandly passionate climax. It’s an ambitious movement which, though not perfectly satisfying formally, is once again certainly well worth hearing.
The 3rd Sonata is receiving its third, and by some margin best, commercial recording. The first movement’s mixture of acerbic, Szymanowskian rhapsody and homespun Irish tweed can seem schizophrenic, but Jackson and Wass bring a cool intelligence to proceedings which manages to focus the material without any sacrifice of freshness or fancy. The mix of wild dance and brooding https://nygoodhealth.com/product/vicodin/ meditation which concludes proceedings is taken ponderously enough to call to mind the lumpen earth-fury of Strauss’ Elektra, at least for a moment. Once again integration rather than contrast is the watchword, and what the movement loses in virtuosic display it gains in cogency. The best compliment I can pay Jackson and Wass is to admit that I hadn’t realised the 3rd Sonata could be so totally convincing!

Considering that the much-recorded Viola Sonata (1922) is for many Baxians the apogee of his chamber output, it hasn’t been too fortunate on disc. Many versions have materialised briefly before vanishing into the ether. Of the ten listed in Graham Parlett’s online discography only four are currently available, two of those historical issues of more interest for the personnel – dedicatee Lionel Tertis and Bax himself, William Primrose and Harriet Cohen – than for the performances. Doris Lederer and Jane Coop’s muscular reading on Centaur went straight to the head of the class, but the new Naxos suggests a viable alternative approach.
The Magginis’ violist Martin Outram doesn’t choose to power through the piece as if it were an alto violin showpiece, but lets his more fragile-toned instrument speak with its own, quiet accent. The result is a delicate, introverted performance where the beauty of the outer movements registers with contemplative stillness rather than heart-on-sleeve passion. The contrast with the tempestuous middle movement is all the better marked, though there’s more finessed wit than diabolism in Outram’s approach than we’re used to. Pianist Julian Rolton, sensitive and responsive rather than barnstorming, proves an able partner here and in the comparatively conventional 1904 Concert Piece, where what Graham Parlett has called “Bax’s youthful propensity for aimless chromatic doodling” is less intrusive than usual, thanks to Outram’s tact. The terse, dark Legend (1929) is once again more poised, less craggy than we’ve come to expect, a quietly effective foil to Watson Forbes and Leonard Cassini’s savage LP reading, still alas awaiting commercial CD transfer.

Hot on the heels of Naxos’ premiere of the 1906 Trio in One Movement, in its original clarinet version with Robert Plane and members of the Gould Trio, we’re treated to the published version for piano, violin and viola. This is effectively a premiere too, as the only previous recording was on a more or less undistributed cassette tape from Triad. Outram makes the awkwardly high-lying viola part sound effortless, Laurence Jackson leads with sweet brio; and to my ears at least the more customary trio forces make for a smoother balance than the clarinet edition. The performance is less piano-driven than in the Naxos alternative, too, all of which helps make the young Bax’s mix of personal, “Irish” inspiration and conventional contrapuntal procedures sound better integrated, and no less engaging, than on Plane’s delightful disc. The Trio certainly concludes Outram’s gentle but highly recommendable disc with a boisterous flourish.