A Life in Film Music 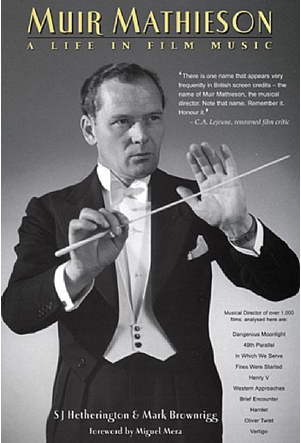 Nobody with an interest in British films of the 1930s to ’50s can have failed to notice the frequency with which the name of Muir Mathieson appears on the opening credits. In a cinematic career spanning thirty-three years he was conductor or musical director for more than 400 films (though not ‘over a thousand’, as sometimes claimed) and was responsible for persuading many eminent composers to write for the cinema, including Bliss, Vaughan Williams, Bax, Rawsthorne, Benjamin, Arnold, Walton, and many others. He also appeared on screen in a few films and wrote the scores for over a dozen more, as well as directing some educational features, notably Instruments of the Orchestra, for which Britten wrote his popular A Young Person’s Guide to the Orchestra.

This book, which was originally published in 2006 and is now available in paperback, is the only full-length study of the man and his work. It falls into two parts of roughly equal length, the first being a biography of Mathieson written by S.J. (Sheila) Hetherington, who is also the author of a book about the Duchess of Atholl, Scotland’s first woman MP. There are eight chapters, covering Mathieson’s early life in Stirling, his time at the Royal College of Music, his introduction to the film world of Alexander Korda, and his subsequent career as a conductor, which ended with his death from cancer in 1975 at the age of sixty-four. The second part of the book is an ‘Analysis of Selected Film Scores’ by Dr Mark Brownrigg, who is a lecturer in the Department of Film and Media at the University of Stirling, his ten chosen films including such well-loved examples as Dangerous Moonlight, Brief Encounter, In Which We Serve, 49th Parallel, and Oliver Twist. There is also a useful list of film credits, a ‘Glossary of Technical Terms’ (both musical and cinematic), and a bibliography, but no discography. It would have been easier to find one’s way around the book if the biographical chapters had had their individual titles printed as the running head rather than just ‘A Life in Film Music’ and the analytical chapters the names of the films being dealt with rather than just ‘Analysis of Selected Musical Scores’. (Curiously, on the divisional title-page of this second section the title appears as ‘Analysis of Muir Mathieson’s Musical Scores’, which makes it sound as if his own work as a composer is being discussed rather than scores he conducted.) However, the appearance of the book is pleasing, the typeface is clear and printed on good white paper, and the price is very reasonable. The front cover shows a striking photograph of Mathieson looking most elegant with baton raised, and there are many other photographs scattered throughout, including the well-known one showing him with a bespectacled Bax sorting out a problem with the score of Oliver Twist.

This being a website devoted to Bax, I shall concentrate on the references to him that appear in the book rather than attempt a more wide-ranging review. He is briefly mentioned several times in the biographical chapters in connection with his music for Oliver Twist and Malta, G.C. (not ‘Malta GC’, as on p.52), though two of the page numbers are wrongly indexed. There is another small mistake on p.52, where the author mentions that Mathieson sought Bax out ‘several times at his residential hotel in Shoreham’ (for which read ‘Storrington’), and I was intrigued by a paragraph on p.120 referring to Oliver Twist:

This time Muir’s first suggestions of Walton or Bliss [as the film’s composer] were rejected in favour of Sir Arnold Bax. Bax accepted with his usual shy reluctance, but David Lean gave extremely precise directions as to his requirements. Having accepted the challenge and viewed the film, Bax asked Muir to allow him to use piano music, to be performed off-camera by Harriet Cohen, for part of the score. Muir consulted Lean, who was not enamoured of piano music, but Muir assured him it would work well.

This contradicts something that I read years ago in the production notes for the film to the effect that it was Lean who had originally suggested the use of the piano: ‘He felt that a rather delicate passage, played on a solo instrument, emphasizes the isolation of the little boy in a world of bullying adults’. This seems to be confirmed in Hans Keller’s article ‘Bax’s Oliver Twist’, from Music Review, August 1948, pp.198-9: ‘I gather that David Lean, the film’s director, suggested to the composer that the title-figure’s loneliness might be rendered distinct by entrusting the Oliver themes to a piano’. Keller may have heard this from his wife, Milein Cosman, who had met Bax a few months earlier when she made a drawing of him for Arthur Jacobs’s Music Lovers’ Anthology (1948); they certainly discussed films at the sitting since Keller mentions that Bax told her of his reservations about writing for the cinema. So, which of these two accounts is correct?  Did Bax really make the suggestion, which was then taken up by Lean? Or did Lean himself come up with the idea? A pity that the author does not give the source for her information.

In the introduction to the analytical chapters, Dr Brownrigg describes his approach (p.145): ‘As original scores are either hard to come by or impossible to find, all of the analysis has been done by ear. This presents a number of problems. Tonal centres and the notation of melodic material can be arrived at easily enough by simply playing along with the film using an accurately tuned piano….’. This is only partly true. Tonal centres can indeed be arrived at, but only if the film is being projected at the correct speed in the first place, and I understand that, for technical reasons, films shown on British television gradually speed up, resulting in a loss of one minute in every twenty-five; this means that the music on the soundtrack will eventually be at a higher pitch than it would be in the cinema. But even assuming that the film is being projected at the correct speed throughout (as it should be on a DVD), the correct notation cannot be deduced by this method, as Brownrigg points out when he writes that ‘some aspects of metre, tempo and dynamics can be hard to call [sc. determine] without recourse to an Urtext….’. In other words, is the basic unit a crotchet, quaver, or something else? Is the passage in 3/8, 6/8 or some other time? In the case of Oliver Twist, however, I should have thought that this rigmarole would have been quite unnecessary since virtually the complete score is extant in written form. After reading his description of the music for this film, however, I deduce that Dr Brownrigg has never set eyes on the score, since every single pitch and key to which he refers is a semitone higher than it should be. We are told, for instance, on p.252 that the opening ‘quiet string tremolo’ is a C sharp when it is in fact a C natural; that the so-called ‘locket’ theme is introduced in F sharp when it should be F; and the very last chord heard in the film is not C major (as stated on p.242) but B major. There are no musical examples in the book, which means that the ‘locket’ theme is laboriously given in the main text as ‘C#-C#-F#-G#-B-C#-F#′-F#′-E’. Using this vague system of transcription, in which minims are represented by repeating the pitch but crotchets and quavers are not distinguished from one another, it should actually be C-C-F-G-B flat-C-F’-F’-E flat. This suggests that when the author made his transcription either the film was running at the wrong speed or his piano was desperately in need of tuning.

Given that Bax’s score is available for hire from Warner Chappell, I cannot think why Dr Brownrigg failed to consult it or even to look at the original incomplete holograph manuscript, which can be seen in the British Library (on loan from Oliver Neighbour). Furthermore, since he nowhere refers to the copious music that was written for the film but not used on the soundtrack, I assume that he is unaware of either the Cloud Nine recording of excerpts issued in 1986 (ACN 7012; ASV WHL 2058) or the later Chandos recording of the complete score (CHAN 10126), which would also have provided him with a much more accurate method of gauging keys and pitches than the original soundtrack. It would also have helped him with more detailed background information. For example, he points out on p.233 that ‘Bax, Lean and Mathieson might have chosen to have a tutti orchestra blaring and crashing like thunder and lightning’ for the storm scene but fails to mention that Bax actually wrote such a sequence, which was jettisoned after it had been recorded in May 1948. On p.236 he writes that, during ‘Oliver’s first gig as a mute’ (a curious use of ‘gig’), Bax ‘strikes a humorous note, Micky Mousing Oliver’s halting half-run, half-walk with alternately fast and slow figures’. But no such fluctuations in tempo are marked in the score; it was obviously Mathieson who added them at the recording session as the film was being screened in front of him.

But, even if the author was unable to consult the score of Oliver Twist or the Chandos CD, there is always Jan G. Swynnoe’s book The Best Years of British Film Music, 1936-1958 (Boydell Press, 2002), which also contains an analysis of the ‘musico-dramatic treatment’ of Oliver Twist with many musical examples. The odd thing is that, although her work is listed in Dr Brownrigg’s bibliography, he seems not to have read it, otherwise he would surely have noticed that his own transcriptions and key-references were all a semitone out. Other mistakes include a description of ‘Fagin’s Romp’ as a ‘merry jig’ (jigs are in triple time; ‘Fagin’s Romp’ is in quadruple time), and two that could easily have been corrected if the author had checked the text of Dickens’s novel (or even, in the first instance, the cast list on the Internet Movie Database): Bill Sikes’s name is misspelled ‘Sykes’ throughout, and Mrs Bedwin is Mr Brownlow’s housekeeper not ‘a maid’ (pp.239-40). Finally, I am not sure whether the reference to Bax as ‘The King’s Master of Musick’ on p.231 is a mistake or merely facetious; the correct form has never been anything other than Master of the King’s Music(k).

I do not wish to suggest that everything that appears in the analysis of Oliver Twist is worthless, and indeed the author makes some interesting observations, such as the effective use of silence at key moments in the film, notably at the climax, with Sikes and Oliver on the rooftops. I am also only too painfully aware how difficult it is when writing a book (or even a book review) to avoid mistakes altogether; but I do feel that a little more care could have gone into the analyses. Having noticed inaccuracies in the transcriptions of music from Oliver Twist, I did a check on some of the other chapters and found that on p.187 the passacaglia theme used in Walton’s music for the ‘Death of Falstaff’ in Henry V is given as ‘F-E-F-C-D flat-C-D flat-A flat’. Reference to the published suite drawn up by Muir Mathieson reveals that, once again, the actual notes are all a semitone lower. Jan G. Swynnoe’s analyses in The Best Years of British Film Music also contain errors and dubious inferences, but she did at least look at the scores she was writing about before committing her thoughts to paper. As a great admirer of Muir Mathieson’s work, I can recommend Sheila Hetherington’s biographical chapters to anyone who is interested in finding our more about his distinguished career; as for the analytical chapters ― caveat emptor!