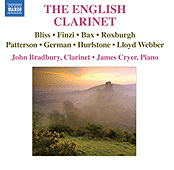 It is a great pleasure to be able to welcome a new CD of music played by John Bradbury, who is principal clarinettist of the BBC Philharmonic Orchestra and has taken part in the series of orchestral music by Bax that Chandos has been issuing over the past few years under Vernon Handley, Martyn Brabbins and Rumon Gamba. His many solo contributions may be heard in these recordings, notably, of course, the unaccompanied opening of the Sixth Symphony’s finale and the second movement of the triple Concertante, in which he negotiates the virtuosic solo part with characteristic ease and distinction. He is a great enthusiast not only for Bax’s music but also, it would appear, for the composer’s favourite game of cricket, since nearly half of his booklet notes for this new CD are devoted to ‘A Cricket Timeline’. This begins with a quotation from Clifford Bax’s book Ideas and People and lists ‘key events in English cricket for the year each piece on the CD was written’, ranging from the Romance by Edward German (1889) to Edwin Roxburgh’s Wordsworth Miniatures (1998).

The Romance, which opens this recital, was written when German was in his twenties and is characteristically tuneful and amiable. Bax’s Clarinet Sonata in D, which follows, was completed in June 1934, a few months after the Second Northern Ballad and a few months before the Octet and the piano score of the Sixth Symphony. The work is dedicated to Hugh Prew, who was an analytical chemist by profession but also an amateur clarinettist and a member of Clifford Bax’s cricket team, the Old Broughtonians. Bradbury and James Cryer, who have been giving recitals together for a long time, take the opening at just the right speed, and it is clear from the way that they phrase the music throughout that they are thoroughly at home in the idiom and know the score inside out. The second movement begins as a whirlwind scherzo (anticipating ‘The Chase’ from Oliver Twist), and here the players execute it with great panache. The sonata has the distinction of being Bax’s most frequently recorded work. There have been no fewer than eighteen versions in all, of which some are very good indeed, notably Michael Collins and Ian Brown on Hyperion CDA66807, Emma Johnson and Malcolm Martineau on ASV DCA 891, and Robert Plane and Benjamin Frith on Naxos 8.557698. This new performance by Bradbury and Cryer is one of the very best that I have heard. (And if you are interested in the very worst, try the one played by Vic Chiodo and Paul Hartley on the American label Mark Records (5385-MCD). The playing is laboured and the piano part sounds as if it is being performed on an out-of-tune upright.)

Some of the other pieces on this new CD often appear in clarinet recitals ― Finzi’s Five Bagatelles, for instance, which also receive an outstanding performance here; while others, such as the Four Characteristic Pieces by Hurlstone, are less often heard. Roxburgh’s Four Wordsworth Miniatures, for unaccompanied clarinet, are musical illustrations of poems by William Wordsworth, with the titles spoken by John Bradbury at the start of each one. Patterson’s Soliloquy is also for the clarinet alone, and here the music is based on the main theme in the fifth movement of Bartók’s Concerto for orchestra, but in such a disguised form that I am not sure that I would have spotted it if it had not been mentioned in the notes. Beautifully written for the clarinet, it exploits the full range of the instrument’s techniques and provides a striking contrast with the two pieces by William Lloyd Webber that follow, which are pleasant and undemanding to listen to. The final work on the disc is Bliss’s Pastoral from 1916, which also receives an excellent performance here.

After all that marvellous playing from Bradbury and Cryer, I wish I could be as enthusiastic about the recording quality on this new disc. The clarinet sound is all right but the piano seems rather distant and sometimes muffled. Nevertheless, with such good performances on offer it would be churlish to make too much of this, and I found that my ears soon adjusted to the balance. For those who are into downloading from the Internet, I should also point out that if you buy this disc you can get a downloadable bonus track of the first movement (Allegro) from Reinecke’s Clarinet Sonata, ‘Undine’.