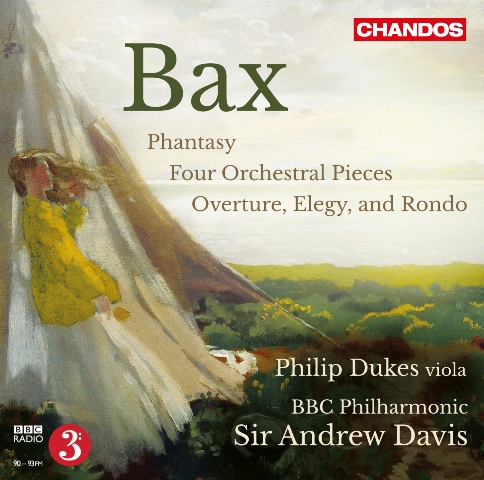 Four Orchestral Pieces (I. Pensive Twilight, II. Dance in the Sun, III. From the Mountains of Home [In the Hills of Home], IV. The Dance of Wild Irravel); Phantasy for Viola and Orchestra; Overture, Elegy and Rondo

A naughty leprechaun prompts me to say that some recent Bax CD issues have emerged, not to the sound of the trumpet, but rather to the faint groan of the scraped barrel. Let me say at once that this Chandos release has stopped any rot. This barrel is bursting at the staves with extremely worthwhile music, superbly played and recorded.

Before discussing the feast on offer, it may be worthwhile to list the precise ingredients. The Viola Phantasy and Overture, Elegy and Rondo have appeared on disc before, but the Four Orchestral Pieces have not – at least in this form. What we have here is the premiere recording of a group of pieces for large orchestra, written in 1912–13 and first performed together as Four Orchestral Sketches at the Queen’s Hall in March 1914. The conductor was Geoffrey Toye, best remembered today for the light, lilting waltz from The Haunted Ballroom (a ballet which propelled Margot Fonteyn to fame) and his popular, 1919 replacement overture to Sullivan’s Ruddigore, written while Music Director of the D’Oyly Carte Opera Company.

In 1928 Bax revised and rescored the first three pieces as Three Pieces for small orchestra, placing Dance in the Sun (retitled Dance in the Sunlight) last, preceded by Pensive Twilight (now given the more prosaic name Evening Piece) and From the Mountains of Home (now Irish Landscape). Those Three Pieces have been recorded before. So has The Dance of Wild Irravel, in its present guise. But this is the first time since 1914 that the full, four-movement original has been reconstituted and played. Clear? Good!

These Four Pieces, with their generous melodies, vibrant colours, catchy rhythms and richly-varied moods are classic ‘Irish’ Bax, and their neglect is baffling. From the Mountains of Home boasts one of the noblest long tunes he ever penned, and the markedly Delian Pensive Twilight is even more subtly scored and contrapuntally complex. Dance in the Sun is a rare Baxian jeu able to carry its esprit through from first bar to last. All three benefit from the wider amplitude and tonal palette of the larger orchestra, so comparisons with some treasured recordings of the small-scale, revised versions – notably Jeffrey Tate’s Three Pieces with the ECO (EMI), and Vernon Handley’s moving Irish Landscape with the RPO (Lyrita) – are not really to the point. Suffice it to say that Davis conjures gorgeous playing from his orchestra, especially in the luminous, lovely pair of Celtic romances; and though the Dance in the Sun is perhaps more flat-footed than fleet, Davis’s restraint at least allows Bax’s delicate and witty Russian-style scoring to come through, in Chandos’s remarkably limpid sound.

As for the swaying, hectic triple-time Dance of Wild Irravel – a word Graham Parlett tells us derives from the Gaelic rámhaille (i.e. dream-delirium, with ‘mh’ pronounced ‘v’) – the conductor generates enough feverish excitement to call to mind Wild Ravel’s familiar, considerably more catastrophic La Valse, which postdates the Bax by about six years. From its sole, previous recording (Bryden Thomson’s staid traversal with the LPO, also on Chandos) I’d never suspected this little-known miniature could carry so much clout. Davis and his orchestra live much more dangerously, and make it one of the high-spots of the programme.

The 1920 Phantasy for Viola and Orchestra, like most of Bax’s concertante works, is surprisingly difficult to bring off. Its surface attractions – not least the moving meditation on the Irish folk song ‘O pretty brown-haired girl of the white breasts’ at the work’s heart – don’t for me disguise something loose about either the structure, or the melodic material, or both. The solo melismas can seem vacuously broody, but Philip Dukes is a secure, sensitive soloist and makes out at least as good a case for the work as anyone else has managed. There is a marginal lack of fire in the outer sections, but he and his conductor make musical love to that ‘brown-haired girl’ with just the right amount of sensual relaxation – certainly compared against the otherwise excellent Dutton issue, where Roger Chase and the BBC Concert Orchestra under Stephen Bell go at the lento semplice so fast as to suggest an encounter of the wham, bam, thank-you-ma’am variety. Handley, the RPO and Rivka Golani (Conifer) seem distant by the side of this newcomer; and the BBC Philharmonic’s playing, supported by Chandos’s balanced, richly-nuanced recording, tips the balance in Dukes’s favour.

Last, certainly not least, comes the Overture, Elegy and Rondo. It was confusingly billed as Three Orchestral Pieces at its first performance, but the printed score dispensed with that generic title. By 1927 Bax’s style has moved away from the ‘Irishry’ of the earlier works here, towards classical structures with an admixture of melodies and harmonies cut from northern folksong and saga. Rather as with the Schumann Overture, Scherzo and Finale which Bax’s title evokes, this is no collection of unrelated short pieces. It is a satisfyingly balanced and highly imaginative work: for this reviewer indeed, one of his very best orchestral compositions outside the symphonies and major tone poems.

The familiar 1987 recording by Barry Wordsworth and the Slovak Philharmonic (Marco Polo and Naxos) has been a useful stopgap, but the new one is two cuts above it. The pithy, barbaric truculence of the Overture, prophetic of the 3rd and 4th Symphonies … the ritual of the Elegy’s misty opening, gradually warming (as its sinister fogs disperse through bright dashes of ‘Grecian’ tambourine and harp) to a sunset-glow … the genial relaxation and tongue-in-cheek ‘pomp and circumstance’ of the Rondo … all are vividly fixed. Once again, especially compared with the valiant but often tentative Slovaks, there’s a sense that this orchestra really ‘gets’ Bax’s style. The woodwind and string playing – plain and unadorned, but with just enough flexibility of phrasing – sounds ‘right’, tempi and mood are perfectly held together by Davis, instrumental balance is flawless, and the Chandos recording has a body and clarity which yield profound pleasure.

You won’t be surprised to learn that I feel this CD is an exciting addition to the Bax discography. For the impossibly rare achievement of the Four Pieces, of course. For a strong Viola Phantasy, certainly. For a demonstration quality recording. And best of all for its revelation of the masterly qualities of the Overture, Elegy and Rondo, which adds breadth and depth to the disc’s earlier, more directly sensual pleasures. It is a collection which I feel sure would have delighted the composer himself. What more could one ask?