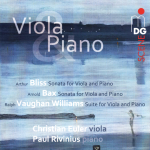 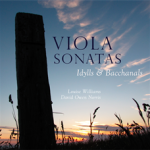 by Bax, Bliss and Vaughan Williams 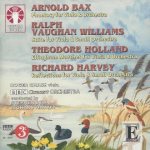 WORKS FOR VIOLA AND ORCHESTRA

Two new superlative recordings of Bax’s evergreen Viola Sonata and much-welcome new take on Bax’s less popular Viola Phantasy are easily among the highlights of recent Bax releases. Recordings of the sonata are becoming quite common. In fact, the Viola Sonata is one of a handful of works that appears to be keeping Bax’s name alive in concert programs and recording studios all over the world (along with the Elegiac Trio, Oboe Quintet, Clarinet Sonata and Tintagel). The Viola Phantasy, on the other hand, is almost never played and has only been recorded once on disc, by Rivka Golani along with Vernon Handley and the Royal Philharmonic Orchestra on Conifer. That recording has always been controversial due to Golani’s very leisurely tempos. This new recording of the Phantasy couldn’t be more different while these new versions of the sonata provide glorious playing and recording as well as new insights into this masterpiece by Bax.

Lionel Tertis was the inspiration for both the sonata and Phantasy and we are fortunate to have his steely interpretation of the Sonata on disc with the composer at the piano. The drawback is the ancient sound and the balance that places the piano so far back as to be almost inaudible. Unfortunately, Tertis never recorded the Viola Phantasy although I have a feeling is version would be similar to Roger Chase’s urgent account if Tertis’s recording of the sontata is anything to judge by. There are more than a dozen current recordings of the sonata available and several video accounts on YouTube by young student violists all over the world. It has become a repertoire work for violists and it’s not difficult to understand why. It’s a virtuosic work of the first order that communicates its troubled moods very directly to the audience. There is nothing vague or uncertain in its structure or expression and it’s one of the few Bax works that is easy to appreciate and understand on first hearing.

All modern recordings of the sonata have something to recommend them. These two new recordings offer quite different interpretations with the German violist Christian Euler on a DG Scene SACD sounding warmer and more relaxed than the English violist Louise Williams on EM Records who produces a gorgeous sound but comes across as a good deal more urgent and focused. It may be DG Scene’s superlative SACD recording but Euler’s viola really does sound rich and that may contribute to the impression of luxuriant warmth that I had of the performance as a whole. But warmth doesn’t equal depth and my only complaint about the Euler recording is that the interpretation feels just a bit too comfortable in places for such deeply troubled music. Still it’s all beautifully played – perhaps the most beautifully played performance on disc but it didn’t move me as deeply as the very best performances of this work always do.

Williams is a good deal more stern and with her you’re very aware of the strict argument of the music and much of it is quite terrifying, especially in the first two movements. While her sound may not be quite as rich as Euler (perhaps a difference in the recording), she certainly has all the technique necessary to pull off a really riveting and much less comfortable account of this great sonata.

Both violists benefit from the playing of truly superlative pianists. Euler has Paul Rivinius who previously accompanied Johannes Moser in his brilliant account of Bax’s Legend-Sonata for Cello. Rivinius sounds every bit as idiomatic here and in a work that features several passages of intensely difficult piano writing, he more than impresses with his virtuosic playing. Williams has the extreme good fortune to have the great Bax authority David Owen Norris at the piano and his playing couldn’t be bettered. He really understands how this music works and his conviction and passion come through as clearly as that of his violist. I would strongly recommend you take the time to read Owen Norris’ program notes on the EM Records website for a fascinating and insightful appraisal of the sonata. I do hope Owen Norris records more Bax someday!

The two interpretations really do complement each other with the Euler being warmer and more romantic and Williams being leaner and more dramatic. Both accounts make a very strong case for the work and I can recommend both without reservation. That said, neither quite replaces my preferred account on Centaur with Doris Lederer the impassioned violist and Jane Coop her intensely sympathetic pianist. This account is not as well recorded as the new versions but certainly good enough while it combines the best qualities of both in that it’s got strength but is also warmly expressive and moving. It is Lederer who always moves me to tears in the last movement and I can’t quite say the same of either Williams or Euler. Choice might be determined by couplings and amongst these recordings there is no overlap. Lederer includes works by York Bowen while Euler includes the prickly Bliss sonata and the lovely Vaughan Williams Suite. Williams gives us a two CD set with rare viola works by McEwen, Maconchy, Jacobs, Rawsthorne, Miford and Leighton. It’s a fascinating program and the disc is available on EM Records website.

Roger Chase gives us Vaughan Williams’ orchestrated version of his Suite for Viola on his Dutton disc of British works for viola and orchestra featuring the BBC Concert Orchestra in fine form led by the brilliant Stephen Bell. This disc also includes Theodore Holland’s Ellingham Marshes for Viola and Orchestra and Richard Harvey’s Reflections for Viola and Orchestra. Mr. Harvey is also the conductor of his work and it’s a very atmospheric modern work for viola that fans of VW and Bax should certainly warm too. The Harvey dates from the mid 1940s and it’s a ruminative work that is both haunting and desolate. It’s wonderful that Mr. Chase would include two lesser known but worthwhile works to serve as companions to the better known VW and somewhat lesser known Bax.

One of Vernon Handley greatest disappointments was that he was prevented from recording Bax Violin Concerto and Viola Phantasy with his great friend Ralph Holmes due to the violist’s early death in 1984. Holmes performed both works often and was a dedicated Baxian and luckily an off-air account of his playing Viola Phantasy does exist with a British student orchestra (not conducted by Handley). Handley did go on to record the work with Ravki Golani in 1988 for Conifer but that interpretation has always divided Baxians, many of whom consider it just too leisurely paced. Handley seemed satisfied with it when I asked him about it but I know he was very eager to rerecord it again for Chandos and it would have been included on Vol. 3 of his Bax series had he lived long enough to record it. My own opinion is that the Golani is a flawed account in that she and Handley have difficulty holding the work together convincingly and the music of the outer sections really fails to catch fire. That said, her playing of the intensely beautiful middle section is near perfect and never fails to transport me to some fanciful Irish landscape of unsurpassed beauty. Oh if only the rest of the performance was as good!

Well, this new Chase performance corrects all the flaws of the Golani and then some. His account is as taut and lively as Golani is relaxed and the Phantasy benefits immeasurably from his approach. The joyous charm so missing from Golani’s recording is here in abundance and much of the credit must be shared with Stephen Bell who holds things together while at the same time making sure the character of the work shines through brightly. The Phantasy is one of Bax’s most delightful works and I think those how only know it from the Golani recording will be surprised but unfortunately, there is a catch. Chase keeps everything on a very tight rein but his playing of the central section is just too quick and dry-eyed to really make the impression it should. Here I longed for Golani’s expressive sensitivity. I suppose you can’t have everything although it’s really a shame that Chase didn’t allow himself just a little more time and space in his playing of the because if he had, this would have been a perfect recording. As it is, it’s still easily the preferred version and should be snatched up by anyone who loves Bax or anything to do with Ireland as it’s a work that’s guaranteed to transport you there.