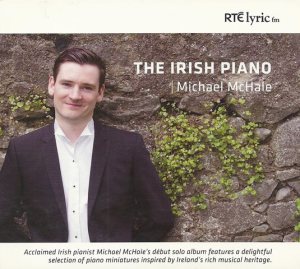 This is Michael McHale’s first solo album and it’s a charmer. This up-and-coming pianist from Belfast first came to my attention a few years back as a member of the Ensemble Avalon and their release of a disc of Piano Trios by Bax, Beethoven and Bernstein. He has gone on to make at least seven more CDs including as accompanist to clarinetist Michael Collins in his series for Chandos and as a member of the Cappa Ensemble. Of his eight albums so far, four include works by Bax so it’s obvious he has some interest in Sir Arnold’s music. McHale includes two works by Bax, one of which is a premiere recording, in this CD of music either by Irish composers or inspired by Ireland. One of the joys of this disc is the variety of music it contains and McHale plays all of it with technical brilliance and style.

Bax is represented by “A Country Tune” and a very early “Nocturne” written while Bax was student at the RAM and this is its first recording. It’s fascinating to hear the influence of Chopin and the absence of any of the Russian composers who would so influence his style in a just a few short years. While it may not sound like Bax, it is a very appealing work with some colorful and virtuosic writing for the piano. I can easily imagine Bax playing this work to show off his pianistic skills although I doubt even he could have improved upon McHale’s playing here. Certainly Michael McHale is to be congratulated for reviving this long neglected work and hopefully this Nocturne will now be included in all future surveys of Bax’s complete piano music.

“A Country Tune” is one of Bax’s most popular piano miniatures and has been recorded by everyone who has tackled complete or semi-complete surveys of his piano music. McHale’s version is one of the very finest. It’s evident that a lot of care and thought has gone into his interpretation. For instance, he paces the allegretto introduction a little more slowly than usual but plays the central staccato theme in octaves marked piu allegro at a nice clip with real accentuation before subsiding back to the relaxed pacing of the main tune. In short, it’s a thoughtful interpretation rather than just a run through and the piece benefits enormously from such affectionate playing.

It’s this kind of attention to detail that characterizes the rest of the program. Better known works by Grainger, Barber and John Field are played alongside some truly dazzling and beautiful arrangements of traditional Irish folks tunes – many of which were arranged by McHale. This is the kind of disc you want to play from the beginning and just be beguiled by some glorious music and truly fine piano playing. I look forward to many more solo discs from this truly gifted young pianist.