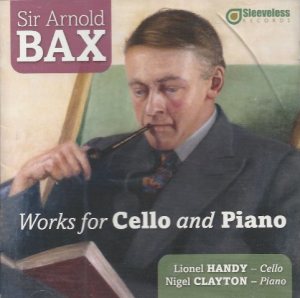 BAX: Works for Cello and Piano


This is unquestionably the most exciting new Bax disc to be released in quite some time. For one thing, it features superlative performances of several lesser known Bax works by an artist who has obviously thought long and hard about how best to perform this music. It should also bring about a reappraisal of Bax’s works for cello and piano, which for too long have been rather underrated even by most Baxians. Anyone with an interest in 20th Century cello music should investigate this disc and in the process discover some of Bax’s most fascinating works – all performed and recorded here to perfection.

Prior to recording these works, cellist Lionel Handy polished his interpretations in a series of concert performances around the UK featuring works for cello and piano by Bax and other British composers including Frederick Delius and Benjamin Britten. Handy is a Professor of the Royal College of Music and an internationally known performer and teacher. As a student at the RAM, he studied with the great British cellist Florence Hooton who herself was a passionate champion of Bax and who recorded the two cello sonatas, Sonatina and Folk-Tale for Lyrita in the early 1960s. She also gave the premiere of the late Legend-Sonata that is included on this disc. Handy recorded this disc in commemoration of her centenary in 2012. I have no doubt she’d be very pleased with the results.

The only discs to include the complete works for cello and piano by Bax are the aforementioned Hooten Lyrita discs (in primitive mono and featuring pianist Wilfred Parry ) and a fine ASV disc from the 1990s featuring cellist Bernard Gregor-Smith and pianist Yolande Wrigley. The Legend-Sonata recently received a very fine performance from superstar German cellist Johannes Moser on the Haenssler label coupled with the sonatas by Bridge and Britten. Handy includes the Legend-Sonata but not the earlier Cello Sonata but in its place he does include Bax’s extraordinary Rhapsodic Ballad for solo cello. The only other available recording of that stormy work is on Chandos with Raphael Wallfisch. Rohan de Saram recorded the Ballad way back in 1976 for the Pearl Label that but recording has to my knowledge never been issued on CD. Those wanting Bax’s complete works for cello and piano should invest in both the ASV and this newer Sleeveless discs which will result in some overlap. Those interested in hearing Bax’s chamber works for cello but not needing a complete set should invest in this newer disc as it compiles Bax’s most appealing works in the form in performances that are easily the equal and in many cases superior to the versions that have come before.

The stiffest competition for Handy comes from Johannes Moser in the late Legend-Sonata of 1943. Comparing the two performances, one is immediately struck by the more expansive view taken by Handy and his superb pianist Nigel Clayton. Looking at the timings, I found that Handy takes well over a minute longer in the first movement than Moser yet without any loss of concentration or urgency in the playing. Moser is quicker in all the movements and his account is intensely focused and taut while Handy allows for a little more autumnal glow to emanate from the music. Moser’s recording is a bit more open and his sound may have a little more weight. I also prefer the piano sound on the Haennsler disc although the differences between the two aren’t significant. What’s nice is that the two interpretations really complement each other and are equally convincing in their own way. I couldn’t help feeling that Handy’s performance was the more authentically Baxian because of its more introspective approach but that’s a wholly subjective opinion.

Competition in the Rhapsodic Ballad comes from that doyen of all British cellists, Raphael Wallfisch and here again Handy is more expansive and the result really is impressive. Bax’s Ballad is extremely concentrated and Bax really stretches his harmonic language to the extreme in much the same way Frank Bridge did in his works for cello such as Oration but is obviously much more concentrated. Those who appreciate Bax’s dark and deeply troubled Second Quartet and Second Symphony will certainly be responsive to the Rhapsodic Ballad. Wallfisch’s recording is also very fine but it doesn’t have the anguish or drama of the Handy performance, which is really quite harrowing.

Handy comes into direct competition with Barnard Gregor-Smith on ASV in the Sonatina, Legend-Sonata and gorgeous Folk-Tale. Gregor-Smith was the cellist in the Lindsay String Quartet so it goes without saying he is as technically skilled and convincing a player as Handy. The difference again comes down to approach with Gregor-Smith being more fleet and concentrated and Handy being more ruminative and exploratory. Both cellists are supported by excellent pianists and in Bax’s chamber music, the piano part is always as difficult if not more difficult than the writing for the instrument being featured. Clayton sounds totally in command of the technical challenges Bax throws at him and it’s obvious he and Handy share the same interpretive goals, which I believe is to discover more depth and power in the music than has been found before.

I often like faster tempos in Bax’s music as can diminish the impression of sprawl that can sometimes creep into Bax’s music when it’s being performed by less experienced players. Handy is hugely experienced and knows this music inside out and there is never a sense of sprawl with him but there is a feeling of going deeper and allowing the music to open up much like we experienced in some of Bryden Thomson’s better Bax recordings. For me, this disc is a revelation and I can only hope that Handy will go on record the earlier Cello Sonata. He has just recorded the problematic Cello Concerto and I fully suspect that recording will be as much of a revelation as this brilliant new release.