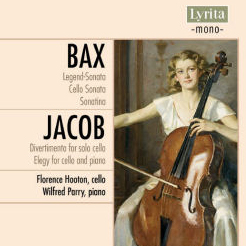 These mono recordings from fifty years ago were first issued between 1959 and 1966 on three Lyrita LPs (RCS.2, RCS.6, RCS.7) and subsequently on the Musical Heritage Society label in the USA, but this is their first appearance on CD. There has been only one other recording of Bax’s four works for cello and piano, played by Bernard Gregor-Smith and Yolande Wrigley on the ASV label (DCA 896); individual recordings of the Folk-Tale and Sonatina have also appeared, but the two pieces by Gordon Jacob are not available elsewhere.

I had not listened to the two original Bax LPs for a number of years and my memory was of poor sound and rough performances; but hearing them again in these excellent new transfers, I am pleased to find that the sound has been much improved and the performances are stronger than my recollection of them. Florence Hooton’s intonation may be a little unsteady in places, and her pizzicati sometimes have an odd, twangy quality and at other times sound almost like a Bartókian ‘snap’, but both performers play with such passion and commitment throughout that it is easy to overlook any imperfections.

Bax’s two cello sonatas ― the Sonata of 1923 and the Legend-Sonata of 1943 ― are both substantial three-movement works. The first was premièred by Beatrice Harrison and Harriet Cohen in the Wigmore Hall, and at the close of the concert, according to The Morning Post, ‘the players received an ovation, and so many floral and other offerings that the attendants in the end grew tired of handing them on to the stage, and disappeared with them through the swing doors’. When did you last see that happening at a recital? The score had actually given the composer a great deal of trouble, and he must have been relieved when the first performance was over. The Legend-Sonata is a more relaxed affair. Harriet Cohen was again the pianist at the first performance, this time with Florence Hooton (the dedicatee) as the cellist, which naturally lends this recording a particular interest. In contrast with the earlier work, Bax enjoyed writing this score and, as he wrote to Aloys Fleischmann, ‘perhaps because of my long rest from responsible composition it all came very easily’. Both works receive full-blooded performances from Hooton and Parry. The slow movement of the first Sonata, in which Bax lifts two sections straight out of Spring Fire, is especially moving, and the cakewalk rhythms of the finale come across very well. The ‘Epilogue’ (thus called in the score) has quite an Elgarian flavour, bringing the work to a noble conclusion, and is played here at a slower pace than in the ASV recording. Gregor-Smith and Wrigley on ASV are suppler and livelier in the first and third movements of the Legend-Sonata, and indeed play very well throughout their CD; but Hooton and Parry, in a different way, are also convincing.

Hooton’s performance of the Folk-Tale (1918) is also better than I had remembered it, though nobody plays it quite as well, in my opinion, as Alice Neary and Benjamin Frith on Naxos (8.557698), which also includes the Clarinet Sonatas and the Trio in One Movement. On the other hand, I marginally prefer Hooton and Parry to their ASV rivals in the Sonatina (1933), which was written for Pablo Casals, though he never played it, as far as I know. It was first performed in 1934 by Harriet Cohen and Thelma Reiss under the title ‘Sonata in D minor’; but five days later they broadcast it as ‘Sonatina’, which is the title given on both the  manuscript and the printed score. The work is certainly very concise in form and the material is unusually extrovert for much of the time, with an eminently whistleable tune in the finale. (I can never understand critics who complain that Bax’s melodic ideas are unmemorable.) Apart from the ASV recording, there is only one other version: an old mono broadcast by Eldon Fox and an anonymous pianist issued on the obscure Going for a Song label (GFS599: ‘Mellow Cello’).

The two pieces by Gordon Jacob are also well worth hearing. The Divertimento for Solo Cello is in four well-contrasted movements, and the Elegy (with piano) is quite moving. Incidentally, the date of the Divertimento is given in Elizabeth Poston’s notes as 1955; but, in the biographical notes that follow, Rob Barnett says that she gave the first performance in 1934. Both dates are wrong, according to the main Gordon Jacob website, where the year of completion is given as 1954. Similarly the date given for the Elegy should be 1958, not 1959; I understand that it was actually composed especially to fill up the very first LP that Lyrita ever issued ― RCS.2 [sic] ― though this is not mentioned anywhere in the notes. The other work on that disc was the Piano Sonata, which has recently been reissued on REAM.1103 coupled with piano works by Moeran.

Referring to the Legend-Sonata, Andrew Keener  wrote that ‘Florence Hooton, the Sonata’s dedicatee, who knew both Bax and Ireland, is the excellent cellist though it is a pity she and her pianist Wilfrid Parry sound as if they recorded it in a broom cupboard’ (John Lade (ed.), Building a Library, OUP, 1979). The sound-quality of the original LPs was certainly not up to Lyrita’s later high standard (especially in the Legend-Sonata, where the piano tends sometimes to drown out the cello), but it has been improved considerably by Simon Gibson’s skilful remastering, and, for me, the absence of stereophony is of no importance. The original notes by Peter J. Pirie and Elizabeth Poston have been retained and there is also a new biographical note on Hooton by Rob Barnett and a striking painting of her as a young woman on the front of the booklet. It would have been useful to have had some biographical information about the distinguished pianist and to have brought Pirie’s notes up to date since a lot more information has come to light since he wrote them over forty years ago. In particular he makes no mention of the connection between the Sonata’s slow movement and Spring Fire, which he almost certainly knew nothing about, since the orchestral work received its first performance only in 1970. A great shame too that Wilfrid Parry’s first name is misspelled ‘Wilfred’ throughout the documentation, since this is probably how it will now appear in CD catalogues. I contacted Lyrita about this and had a reply from Caractacus Downes (webmaster) saying that steps had already been taken to correct this mistake in their print master files and on their website.

I certainly urge you to try these discs, which not only have historic interest but contain fine performances. They may be less polished than later versions, and I suspect that long takes were used ― rather like listening to live concert performances; but the artists’ enthusiasm for the works comes across very clearly.