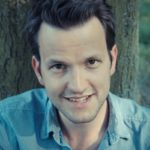 British Bass-Baritone Timothy Dickinson is well known from his recitals across the UK to his operatic roles at Glyndebourne, Scottish Opera, Longborough and elsewhere. He has toured internationally with Silent Opera and has also been a regular guest at the St Endellion Festivals in Cornwall. Additionally, he has enjoyed a rewarding association with the education department of the Orchestra of the Age of Enlightenment, performing with young people across the UK in several newly-devised shows based around the music of Purcell and Mozart. One of his most recent projects is a disc of British Christmas songs by composers ranging from Vaughan Williams and Holst to Warlock and Bax. He is accompanied by the popular British pianist, Duncan Honeybourne. In the interview below, he speaks about the new disc.

Richard Adams: How did your disc of Christmas songs for piano and bass-baritone by British composers come about?

Timothy Dickinson: I had long harboured the idea of making a disc of Christmas music, but only as a vague, fantastical notion. I love a good Christmas disc, and made a few when I was a boy chorister at Westminster Abbey, but hadn’t ever considered what I might do as an adult singer. It was only when Duncan Honeybourne asked me to join him in Weymouth for a Christmas concert that I started looking at songs like Michael Head’s ‘The Little Road to Bethlehem’ and Vaughan Williams’ ‘The Oxen’, and the idea for an expanded programme of similar music started to take root. It would be all too easy to go down a very traditional path and cover all the well-trodden ground of ‘Adeste Fideles’, ‘O Holy Night’ and so on, but somehow that didn’t appeal. I also wanted to avoid pretending to be a baritone: I’m very much in the Bass-Baritone category, and that’s a slightly narrower bracket when it comes to song choices, particularly “English Song”. So much of the best-known English Song repertoire is written with Baritones and Tenors in mind. So, I did some digging and discovered a 1973 LP called Christmas with Forbes Robinson, himself a very well-respected operatic Bass-Baritone of a previous generation. The record was clearly made in collaboration with the publisher Josef Weinberger, and featured some repertoire that was completely unknown to me, as well as some traditional carols (his a cappella rendition of Silent Night is a highlight) and some of the well-known songs which Duncan and I were to include in that Weymouth recital. Essentially, Robinsons’ disc became a sort of template for our disc, and gave me a bit of much-needed confidence to pursue a programme of Bass-Baritone repertoire.

RA: Was it a challenge to provide a full program of songs as I notice you include a few solo piano pieces (for Duncan Honeybourne) to break up the sets?

TD: In fact, we had more than enough song repertoire, and I’ve since unearthed a whole lot more. From experience, though, having instrumental interludes in a Song Recital has two very useful functions: it refreshes the audience ears of the audience and gives the singer a break! That aside, I love Duncan’s playing, and knew he’d have just the right solo repertoire tucked up his sleeve – and what riches he produced!

RA: You include three of Bax’s Five Fantasies on Polish Christmas Carols. How did you become familiar with those songs and how did you select which three to perform on your disc?

TD: We have Forbes Robinson to thank for the Bax songs. He included two of the Five Fantasies on his LP (‘In Nightly Stillness’ and ‘Lullay, dear Jesus’). It wasn’t easy to get hold of a score of the voice & piano version, but when it did eventually arrive, I played through all of the songs at home and chose the three that best suited my voice. ‘In Nightly Stillness’ was a strong contender, but I felt that we already had enough material in that vein in our programme.

RA: What do you know about the song’s origins?

TD: Relatively little, actually. I know that there is a version for chorus and orchestra (and the piano part is very obviously an orchestral reduction, rather than a bona fide piano part), but I haven’t yet discovered why the version for solo voice was made, which came first, or whether there was a specific singer in mind. I am aware that Bax enjoyed collecting and using Folk music from Eastern Europe, particularly Russian music, but my knowledge extends no further.

RA: How would you compare Bax’s writing for voice with those of his contemporaries on the disc?

TD: That’s an interesting question. I’m not sure that this is the best example of his vocal writing to dissect, as he pretty much sets the Polish Carol melodies note-for-note. The “Fantasy” element is really in the piano part. I would say that, purely in terms of tessitura, the songs were written with a Mezzo-Soprano or Baritone voice in mind. ‘God Is Born’ and ‘Merrily to Bethlehem’ also gave us two much-needed up-tempo songs, which are relatively few-and-far-between in the English Song repertoire. But again, these are the traditional Polish Carols, not Bax’s original music, so this is no real comment on his writing.

RA: Are there any other Bax songs that you’re eager to perform in the future?

TD: Well, his ‘A Christmas Carol’ (published in 1919) was obviously on my radar, but it lies very high, so I would have to make a transposition. That said, I don’t want to give you the impression that I only sing Christmas music! The truth is, I know very little of Bax’s music for voice. Many of the songs I’ve seen are definitely written for higher voices, and might not transpose particularly well (it’s the piano part that tends to suffer, or become unplayable, in transposition). I might attempt ‘The White Peace’ at some stage, and I’ve recently been made aware of ‘Jack and Jone’ and ‘I Have House and Land in Kent’ from the lovely Continuum disc of Bax Songs, so I’d love to get hold of them. Again, not a straightforward task, I’m sorry to say.

RA: I once heard another singer criticize Bax’s songs for their overly-complex accompaniment? Is that a problem with his Christmas Carols and if so, how?

TD: That’s fair, I think. The piano writing does tend to be a little over-wrought in the few songs I’ve seen – a lot of fast, triplet runs and crossing of hands. However, I think this overt floridness jars with people because it’s so unlike many of Bax’s contemporaries from the British Isles. You don’t find this kind of writing in John Ireland’s songs, or in Gurney, Quilter, or Finzi, for example. But you do find it in Strauss, and you find it in Hugo Wolf. Perhaps it’s a question of approach? With the ‘Five Fantasies’, the problem is slightly different, as I mentioned. They’re orchestral reductions, which are often needlessly tricky and not always written with the pianist in mind.

RA: Do you have any particular favorite songs from this Christmas album that you intend to perform in recital?

TD: We’re going to perform all of them at some point, but I do have my favourites. I’d say that ‘The Frostbound Wood’ (Warlock) and ‘The Little Road to Bethlehem’ are the ones to which I will look forward the most. My current favourite track on the disc, however, is Duncan’s performance of ‘The Sussex Mummers’ Christmas Carol’ by Percy Grainger.

RA: I saw from your website that you’ve devised another recital program based on songs about Don Quixote. How did that come about?

TD: Anyssa Neumann and I wanted to put together an interesting programme to give us an excuse to work together. She asked if I knew the Ravel Quixote songs, which I didn’t, but I did know the Ibert set. So, these two groups were our starting point, and our focus became George W. Pabst’s film of 1933, featuring the great Russian Bass Feodor Chaliapin. It’s an extraordinary film, and an odd one. The legend surrounding Pabst’s search for a composer is shrouded in mystery, but certainly involved both Ravel and Ibert, and possibly a lawsuit from Ravel. Digging a bit deeper, we discovered Marcel Delannoy’s Quixote songs (he’s another composer occasionally attached to the Pabst story), recently republished. We added some excerpts from Massenet’s Don Quichotte (premièred by Chaliapin), some poetry and prose readings, and Ibert’s famous Le petit âne blanc for good measure, and it makes for a very satisfying and intriguing programme. It kept evolving as time went on, and we hope it will continue to evolve in years to come.

RA: Your pianist for this recital is Duncan Honeybourne. How did the two of you become acquainted and what made you think of him for this album?

TD: I met Duncan at Sherborne School in Dorset, where he teaches Piano and I teach Singing. I very quickly became aware of his extensive catalogue of recordings and spotted a kindred spirit with a clear passion for music of the British Isles, and an enthusiasm for unearthing forgotten gems. I’m so happy that he agreed to make this disc: he was the obvious choice!

RA: Musicians have been even more negatively affected by COVID than the general public due to the cancellation of concerts, etc. How have you managed during this period?

TD: My wife is also a musician, so it was quite a precarious time for us in the very early days of uncertainty fear and uncertainty. However, we were both very fortunate to have benefited not only from the Furlough scheme (we both have teaching positions in Schools local to us) and from the Grants bestowed on Self-Employed people by the UK Government. I was also supported by Help Musicians UK, a wonderful charity, and my Union, Equity. There were other initiatives, including online concerts and remote recording sessions, which helped to keep us afloat, but I don’t really believe that the online model has any longevity in the real world. Nothing can compare to a live performance. Happily, we have been back in Churches and Concert Halls for some months now, though things are far from back to normal, and we are still beset by cancellations, postponements and ever-shifting guidelines.

RA: What are your future plans?

TD: I am very much enjoying and embracing what we call ‘a portfolio career’. I do a bit of Opera (I’m in Lille at the moment for a production of Dido & Aeneas); some ensemble work; some Recitals (Duncan and I are promoting the Christmas Album in two more concerts this month); some Oratorio work (it’s Messiah season in the UK); some session work and some voiceover work. This variety not only keeps things interesting, but also means that I can be at home with my young family for much more of the year than if I were committed solely to any one of these disciplines. So, my future plans are to spend Christmas with my family and to take things a week at a time, at least for the time being.